No public company, no matter how large, is immune from possible attack from activist investors. Emmanuel Faber, CEO of Danone, for example, was recently ousted by activist investors (Bluebell Capital and Artisan Partners) in March 20211.

Activist investors aim to shake things up. If their ideas are good, they can have the clout to change the course of a company in the right direction; conversely, they may threaten the long-term strategy of a company and destroy value. They typically manifest themselves when a company is underperforming.

Activist investors are sometimes portrayed as being of a certain state of mind—always scouring for opportunities on how to improve value—which is why we suggest this article even for management and owners of private companies. We suggest that every CEO should have the ability to view his own company like an outsider, looking at his own actions and company performance through the lenses of independence and objectivity.

a, What is an activist investor?

An activist investor is “an individual or group that purchases large numbers of a public company’s shares and/or tries to obtain seats on a company’s board to effect a significant change within the company.”2 These are typically hedge funds, private equity funds, or wealthy individuals.

b, Trends for activist investing 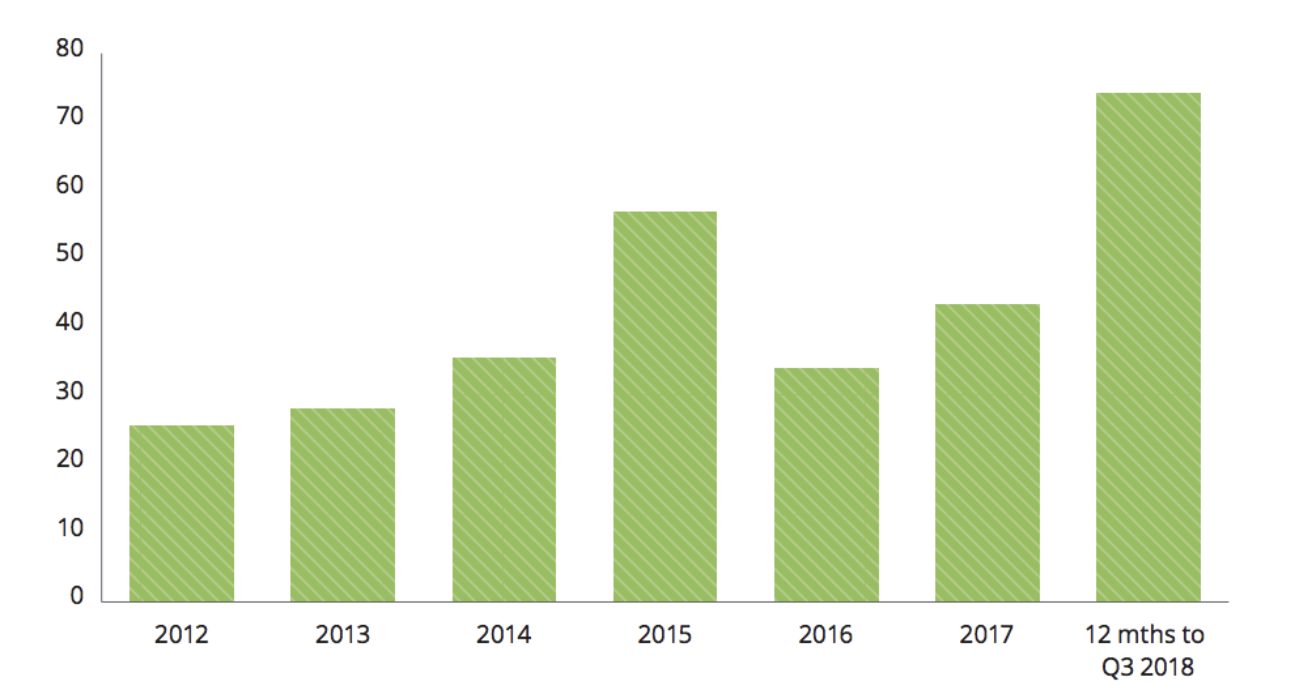 In Europe, despite a big drop in activist campaigns during the first months of the pandemic, there was a 21% year-on-year increase in campaign activity in 2020.5

According to a survey done by Skadden, a law firm, only 3% of companies surveyed said their board had received no approach at all (either privately or publicly) from activists since the onset of the pandemic:

Exhibit 3: Percentage of boards that have been approached by activist investor in 2020 in Europe6

c, What types of decisions do activist investors typically drive within companies?

Basically, anything that has the potential to increase the valuation of companies, including: The following chart gives an idea of the relative frequency of activist measures and the primary objectives of the activists: Exhibit 4: European Campaign Objectives change in % from 2019 to 20207 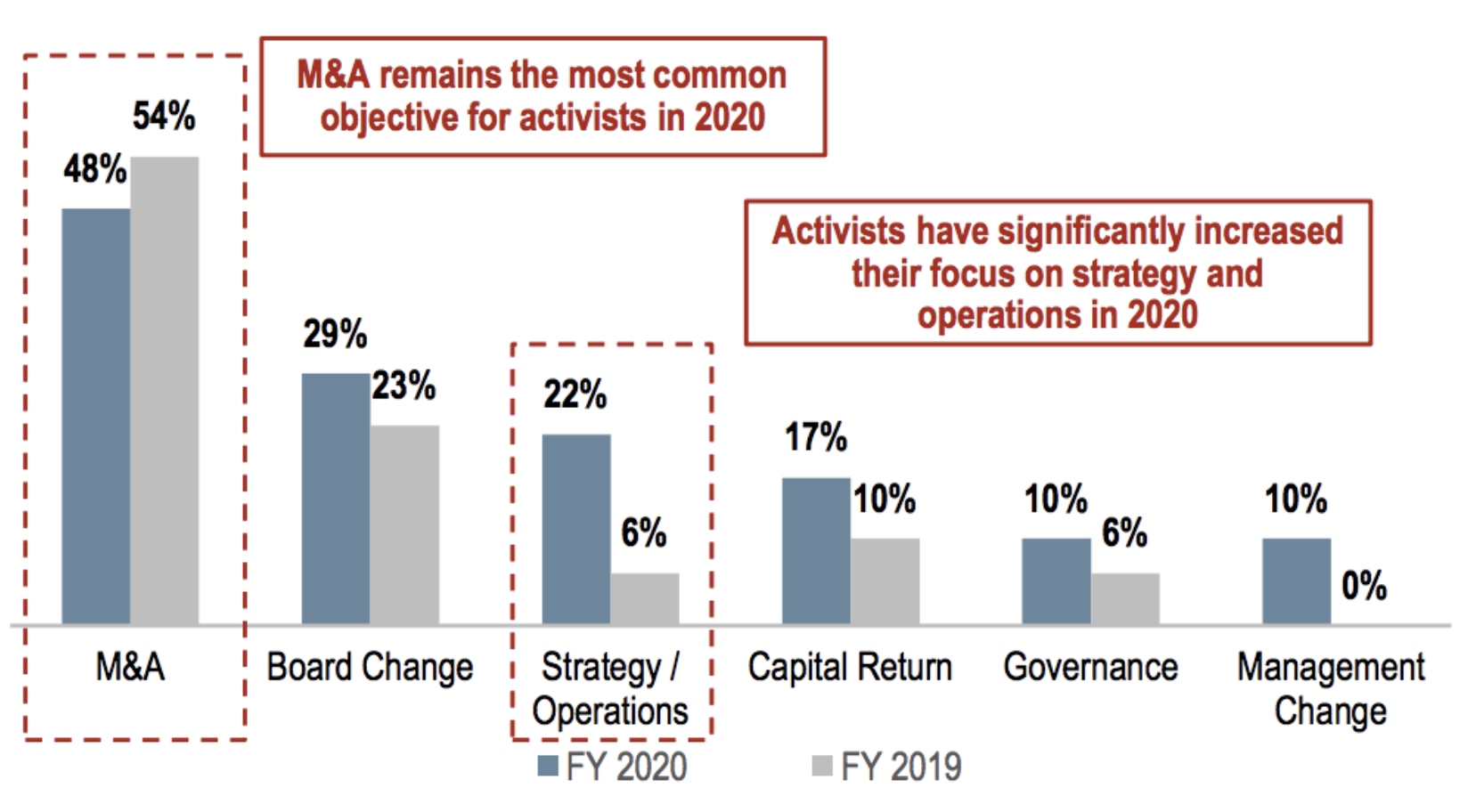 One can see how a short-term bias might creep in, given that there might be a temptation to drive up stock price – to pump and dump, but then again, many shareholders have short-term objectives. The difference is that activist investors are far more sophisticated and better-informed than the average shareholder, and may have one or more seats on the board, hence a greater ability to influence the direction of a company. Furthermore, they have the ability to mobilize votes of passive shareholders.

d, Some evidence as to the effectiveness of activist investors

Critics often accuse activist investors of burdening their targets with debt, cutting vital research and development budgets, blocking new investments and then making a quick exit as the consequences of their decisions blow up behind them. But a study of 50 activist-held companies from 2009-2014 suggests that this may be a myth, and that activist investors don’t have such negative effects: 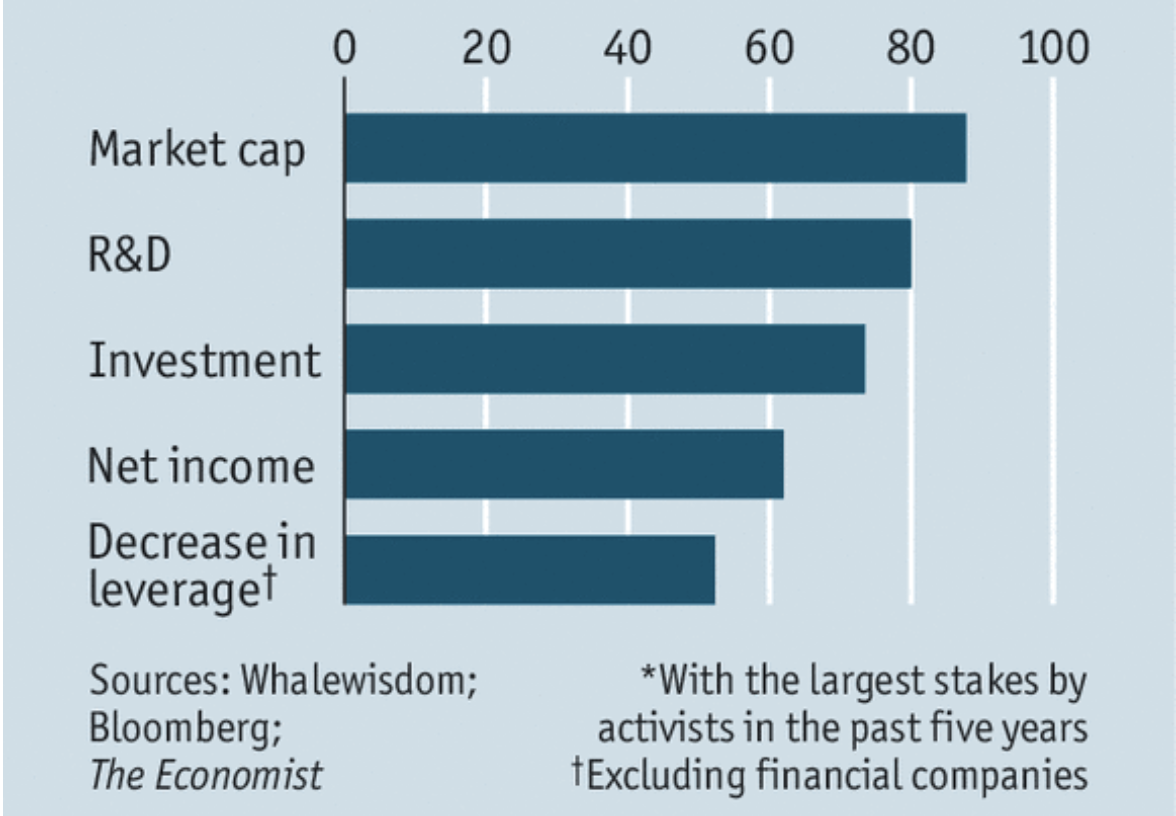 The above chart show surprising improvements in R&D and actual decreases in leverage.

In a nutshell, activist investors may not always be the parasites that Hollywood sometimes portrays them to be. When they invest in companies, their interests are usually aligned with other shareholders, and there are times when the desire to shake things up might be legitimate. Of course, as with French verbs, there are exceptions to every rule.
1https://theconversation.com/danones-ceo-has-been-ousted-for-being-progressive-blame-society-not-activist-shareholders-157383
2https://www.investopedia.com/terms/a/activist-investor.asp
3Deloitte – https://bit.ly/2OqXfuO
4Lazard: 2020 Review of Shareholder Activism – https://www.lazard.com/media/451536/lazards-2020-review-of-shareholder-activism-vf.pdf
5https://www.lazard.com/media/451536/lazards-2020-review-of-shareholder-activism-vf.pdf
6Skadden – https://dkf1ato8y5dsg.cloudfront.net/uploads/9/376/skadden-activist-investing-report-final-hqp.pdf
7https://www.lazard.com/media/451536/lazards-2020-review-of-shareholder-activism-vf.pdf