With the long-term trend in interest rates down, and inflation trending upward, (alas, with increasing signs of not being transitory), more and more debt instruments have increasingly negative real interest rates. “Bonds are not the place to be these days… Fixed-income investors worldwide – whether pension funds, insurance companies or retirees – face a bleak future.” according to Warren Buffet. Even nominal yields are increasingly negative, as the following chart shows: 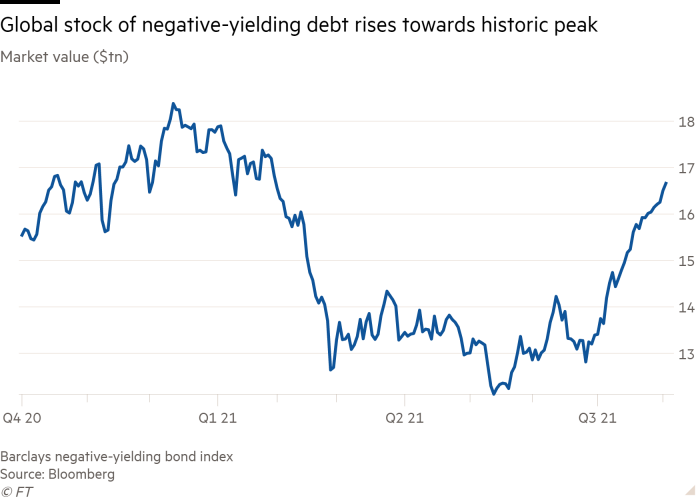 The first part of this article deals with why this trend is likely to continue or to even be accentuated. The second part deals with how to protect yourself in this type of environment.

a, Why negative real interest rates are here to stay

The chart below shows a pattern of asset increases on the balance sheet of the US Fed, which has purchased bonds and other assets as a way of lowering yields. Over the past decade there have already been four attempts to reverse the trend, each resulting in a “tantrum” (e.g. where markets crash, necessitating massively increased stimulus to resuscitate the economy):

Exhibit 2: A History of Fed Tapers
(Federal Reserve’s Balance Sheet as a Percentage of Nominal GDP) 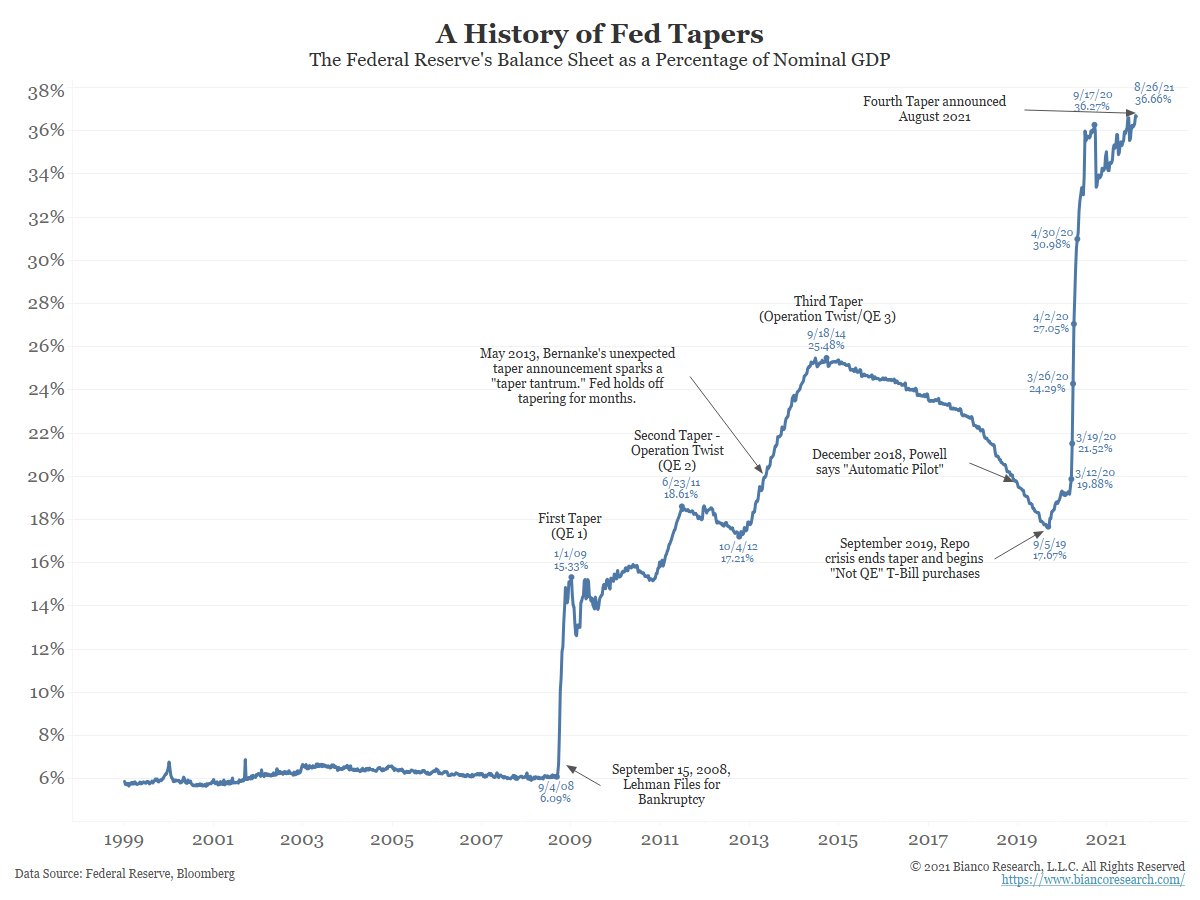 With Governments, corporations and individuals all addicted to debt, the only real option for Central Banks is to let inflation run at least 3-4% higher than interest rates, so that they can inflate their way out of the debt mountain. There is precedent for this: the US pursued precisely this strategy to handle the debt amassed during World War II.

Given that monetary policy (low interest rates and buying bonds as controlled by Central Banks) is reaching its limits, Governments are also getting into the act of stimulus via helicopter money and deficit spending. They are also guaranteeing loans given by banks, meaning that there may be a dramatic increase in bank lending, through which new money will be created.

Manufacturers are beginning to feel acute shortages of inputs, from steel to microchips. Container shipping costs are skyrocketing. Labor shortages popping up all over. Velocity of money has fallen so low over the past decade, it has nowhere to go but up, once again fueling inflation.

b, How to protect oneself in this environment?

The current investing environment has been called many things– from the “everything bubble” to the “Powell Put.” Inflation turns cash into trash. Pensions are likely to be ravaged by inflation. Under these circumstances, where does one park one’s wealth? This is perhaps the most pressing issue facing investors in an inflationary environment. There is a hunger for yield, which is what drives most valuations to the stratosphere. We see three outlets for cash in this environment:

Notice that bonds are not on my list. Someone who buys bonds with ultralow yields collects puny interest in exchange for taking substantial risk that higher inflation or a surge in rates could more than wipe out gains.

But it is important to note that within each of the above three asset classes, there is a search for quality. Knowledge of each market becomes particularly important. It is of course all-too-easy to find real estate, publicly listed shares, or commodities that will perform poorly in the coming years.

But if you have the time and knowledge to search out quality shares or real estate that produces cash flow, are well managed, and are likely to produce ever-increasing cash flows, these types or real assets have a good chance that value improves at least with the value of inflation— or at least to produce better results than holding cash.

Of course, if you believe that markets may crash in the near future, it may make sense to hold some cash, to have liquidity to take advantage of bargains.

Bullion is a bit of a different situation. It is perhaps the only major asset class which in our opinion is undervalued in this environment, perhaps the only asset class which has been bypassed by the “everything bubble”. A very interesting phenomenon, given that bullion tends to perform very well in an inflationary, negative real interest rate environment. It makes a lot of sense to hold at least a small percentage of one’s portfolio in bullion: We live in interesting times. Investment strategies that worked over the past low inflation declining interest environment are unlikely to work in an inflationary, negative real interest rate environment. This Article is not to serve as advice to any investment decision. No person shall assume any liability for information herein.
Back