Let’s start with GDP. GDP = No. of staff in workforce x productivity. So, if the population of certain countries (Russia, China, etc.) is expected to decrease by 30-40% the next 30 years (which is indeed the expectation), unless there is a productivity miracle, their GDP’s will constitute a smaller share of global GDP. 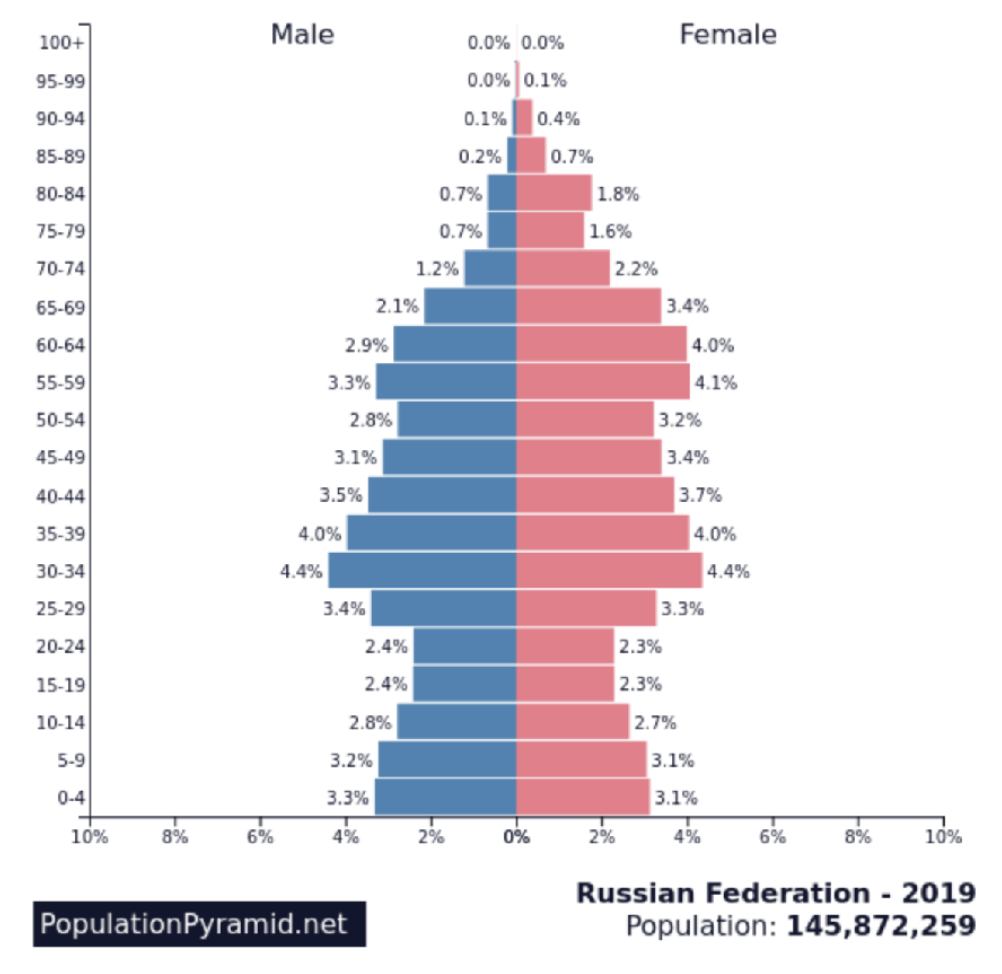 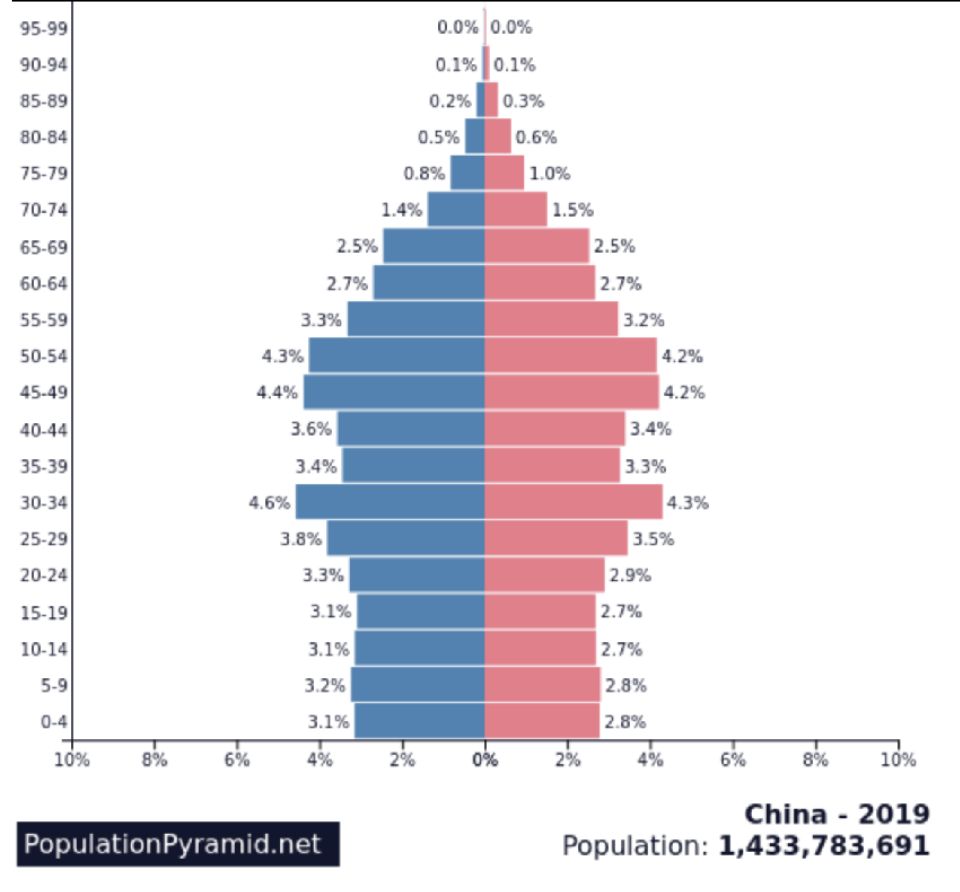 In Russia, urbanization happened somewhat earlier than in China. People tend to have fewer children when they live in overcrowded apartments than when children provide free labor on farms. In China, the demographic implosion was accelerated by the Government’s “one child” policy. Severe sanctions were imposed on families with more than one child. Estimates range as high as 200 million to the number of infant girls killed so that the family could have another chance at having a son. (Note how many more males than females at the bottom of the Chinese pyramid). This inhibits family formation.

In Russia, demographic implosion is now being further accelerated by men dying in their prime in Ukraine, and massive emigration since the start of the war.

The United States enjoys much healthier demographics: baby boomers, for whatever reason, had more children than in Russia or China.

As mentioned, demographics deals not only with population numbers, but also breakdown of the population according to age cohorts. Over the next few years, a large number of baby boomers will transition from the workforce into retirement all over the world. While there is a graying population in the United States, the trend is far more pronounced in China and Russia.

Given that, 25–65 year olds provide the bulk of the workforce, in the unlikely event that birthrates could be encouraged to say double, it would take 25 years for newly borns to enter the workforce, let alone reach peak productivity. There is no instant solution. One might surmise that relative GDP’s of Russia and China are peaking at present vis-à-vis the United States.

Russia’s GDP ($1.775 trillion) is much smaller than most people realize, less than Canada’s! ($1.991 trillion). (2021 numbers). Russia packs a punch above its economic weight thanks to their stock of nuclear weapons and a strategic position with respect to commodities, most notably oil and gas. However, as Russia’s GDP declines in relative terms due to demographics, their nuclear arsenal becomes more obsolete, energy stocks become depleted and the world turns away from hydrocarbons, their influence in the world may well decline. The start of the Ukrainian War may well mark “Peak Russia.” In my opinion, it is “all downhill” from here—perhaps why Putin thinks it’s now or never that Russia must exercise its muscle– to maintain its geopolitical prominence.

With China, the situation is much more subtle, given that its population is triple the US, their GDP is already larger than the US on a Purchasing Power Parity basis, and that they are so much more of a force in technology than the Russians. Yet, here as well, a demographic implosion is preordained and irreversible. If their population goes down by 30-40%, and the US population goes up by 15-20% by 2050, it is likely that Chinese GDP relative to the US will also shrink.

Where does Central Europe stand with respect to demographics? Unfortunately, as the following population pyramids demonstrate, they are trending imploding as well. 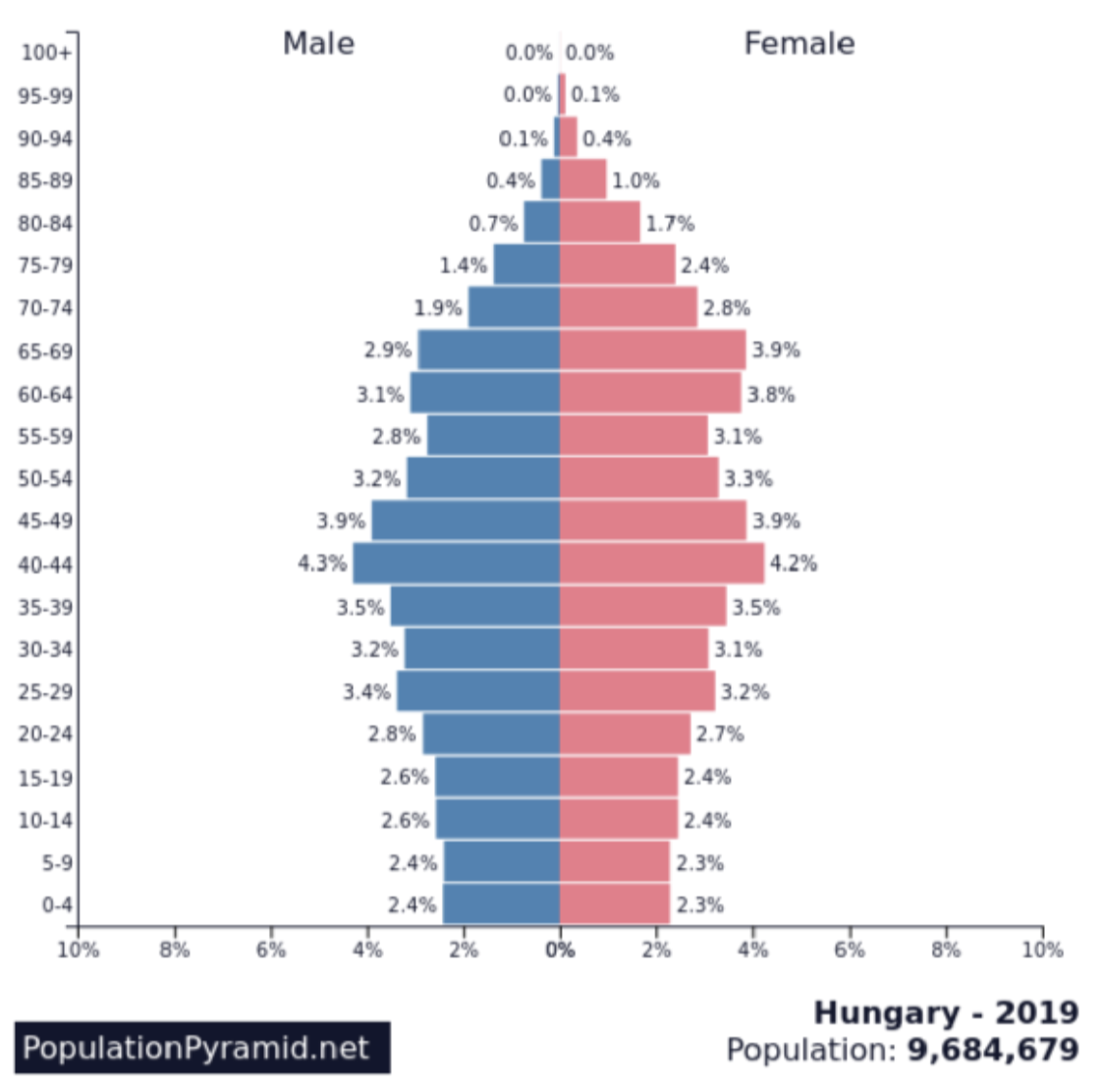 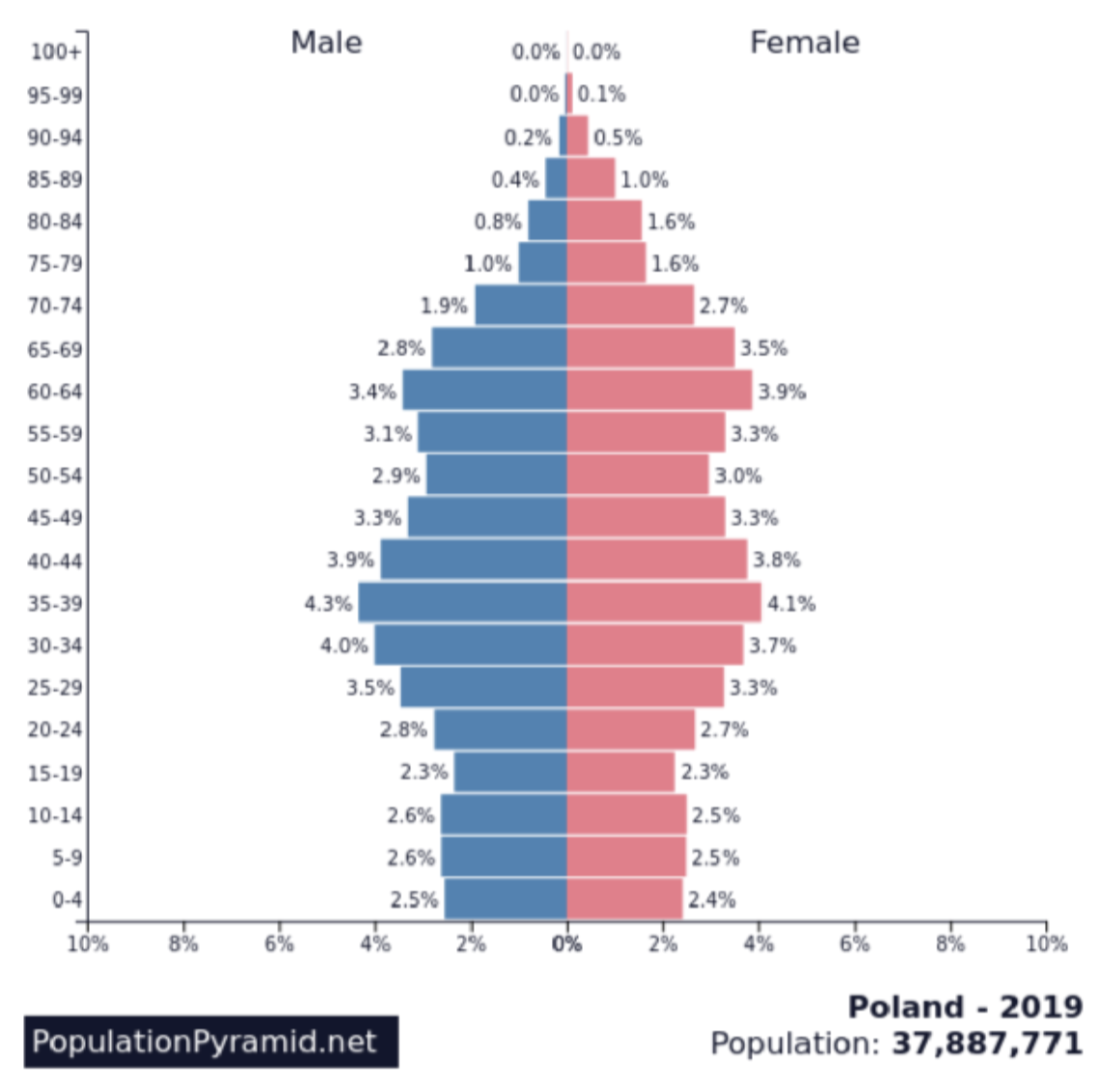 So the situation does not look that healthy for Central Europe—in fact, over the past decade or so, births have been even fewer that in Russia or China.

Until age 40-45, wage earners are primarily spending their earnings (having children, making a household, etc.), whereas after that age, the emphasis is on savings (e.g. for retirement). Once again, the former triggers consumer spending, which propels GDP growth.

Of course, one of the most significant aspects of aging populations is the increasing ratio of elderly, who must be supported (pension, medical, etc.), to workers. In Europe, for example, the ratio of pensioners to workers is expected to rise to 71% by 2060.

There is no short-term solution. If we were to change tax policies, housing availability, etc. today, in 25 years we could see the pensioner to worker ratio improve. The other solution would be to encourage everything that promotes productivity (automation, etc.). For example, Japan, which is facing a major problem with an aging population, is using digitization to compensate for a lack of labor.

In my next article, I intend to build on this article and discuss how demographics is also fundamental to finance: performance of financial markets, cost of capital, etc.
Back

In my opinion, the macro environment is riskier than before the Dotcom Bubble and before the Great Financial Bubble. Why? A nasty cocktail of factors which may reinforce each other

Is the US Fed playing with the wrong levers? By Les Nemethy, CEO Euro-Phoenix Financial Advisors, former World Banker

Many economists are of the opinion that the US Fed has had a pretty abysmal track record in forecasting inflation during past years.