Foreign Direct Investment has an enormous impact on economic performance of developing economies.

This article looks at recent patterns of FDI flows in emerging markets, particularly with respect to Central Europe.

Just to define our terms: FDI is defined by the World Bank as a category of cross-border investment associated with a resident in one economy having control or a significant degree of influence on the management of an enterprise that is resident in another economy1. FDI encompasses both trans-border M&A and organic growth by foreign-owned companies.

Global FDI fell from approximately $1.5 trillion in 2019 to $859 billion in 20202. This is the lowest level since 2005 and almost 20 per cent lower than the 2009 trough after the Global Financial Crisis (GFC). While the majority of this decline may be attributable to Covid-19, US-Chinese tensions have also contributed to the decline. The decline in FDI was significantly sharper than the fall in gross domestic product (GDP) and trade3.

In 2020, the impact of Covid-19 was very significant on FDI inflows on a global scale and is comparable to the impact of the GFC. 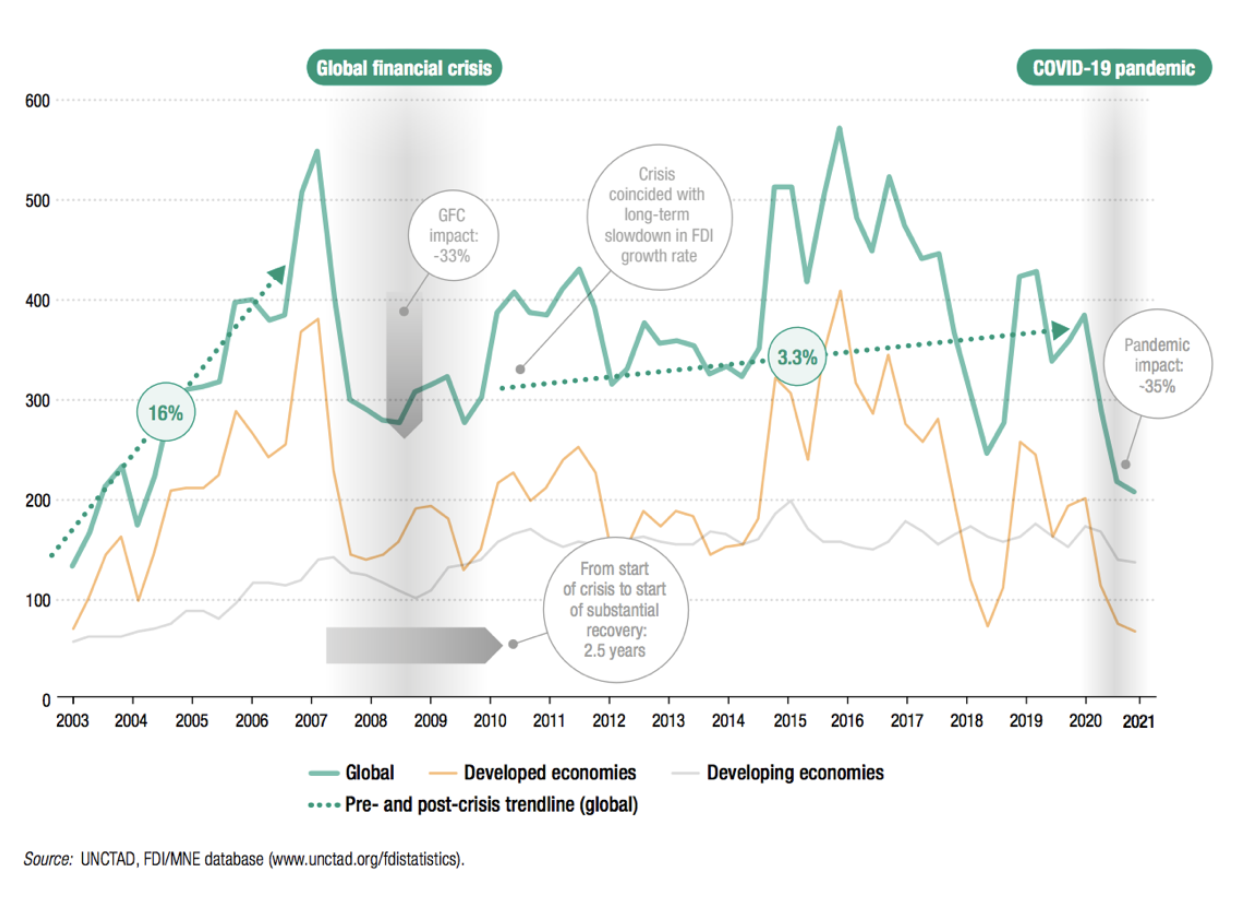 In Central Europe (CE), FDI fell by 58% in the first half of 2020 compared to H1 2019, as the coronavirus (COVID-19) pandemic and lockdowns curbed economic activity4. M&A was also poor in 2020, with 1705 deals counted in CE for a total of $60.8 billion. This represents a 12.9% decline in number of deals and 16% decline in deal value compared to 2019. Despite a strong fourth quarter in 2020, and despite CE putting in a stronger M&A performance than most other parts of the world, this represents the worst annual M&A performance in over a decade5.

The FDI decline was caused by the pandemic and not a diminution in the investment attractiveness of the Central European region. The eleven CE countries (EU11) each improved their attractiveness as a destination for foreign investment, thanks to their proximity to west European markets, relatively developed infrastructure, political stability, lower taxes and a generally well-educated workforce. EU membership compensates for the smallness of many domestic markets. 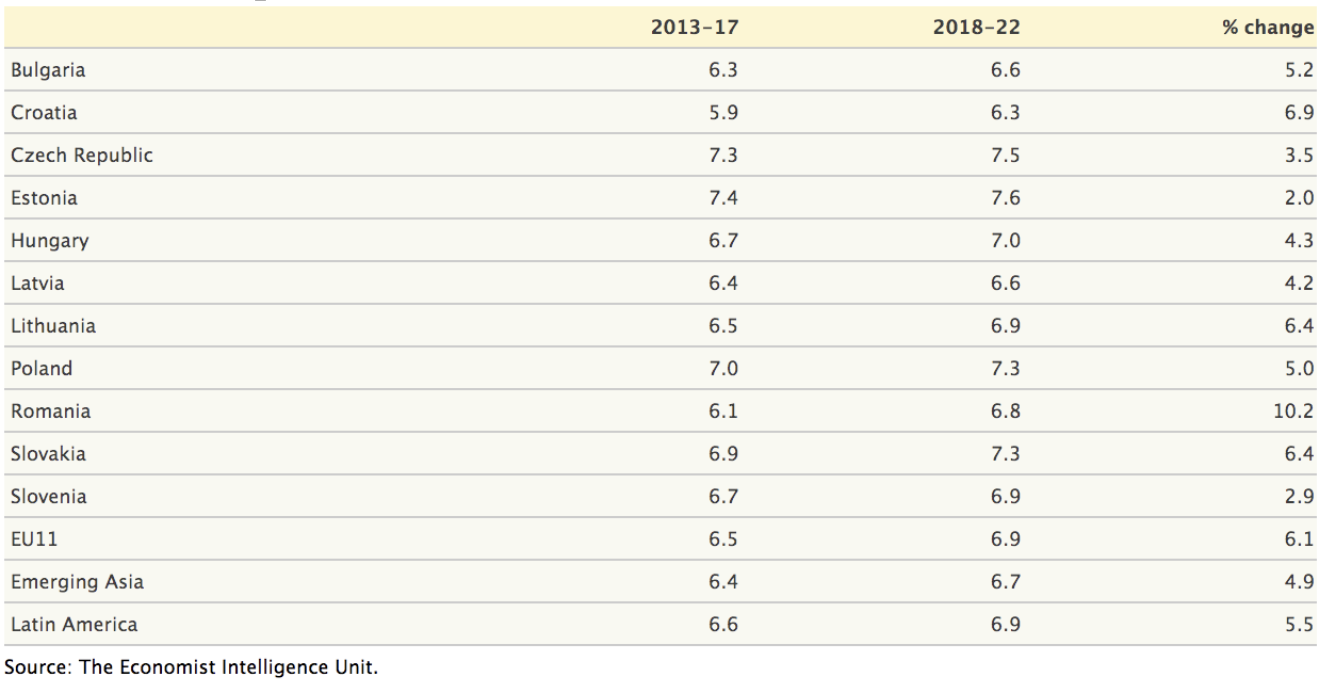 The charts below show how volatile FDI flows were for each of the Visegrad Four countries, depending on specific deals and timing of Covid-induced lockdowns:

Exhibit 3: Czech Republic, Poland, Hungary and Slovakia’s Foreign Direct Investment from Jan 2019 to May 2021, (USD million6) (all data below is monthly, except Hungary which is quarterly)

The following Exhibit sets out the relative strength of German, US, and Chinese FDI into various CE countries;

Exhibit 4 : German, US and Chinese FDI into Central European countries (most recent available year of data for each) 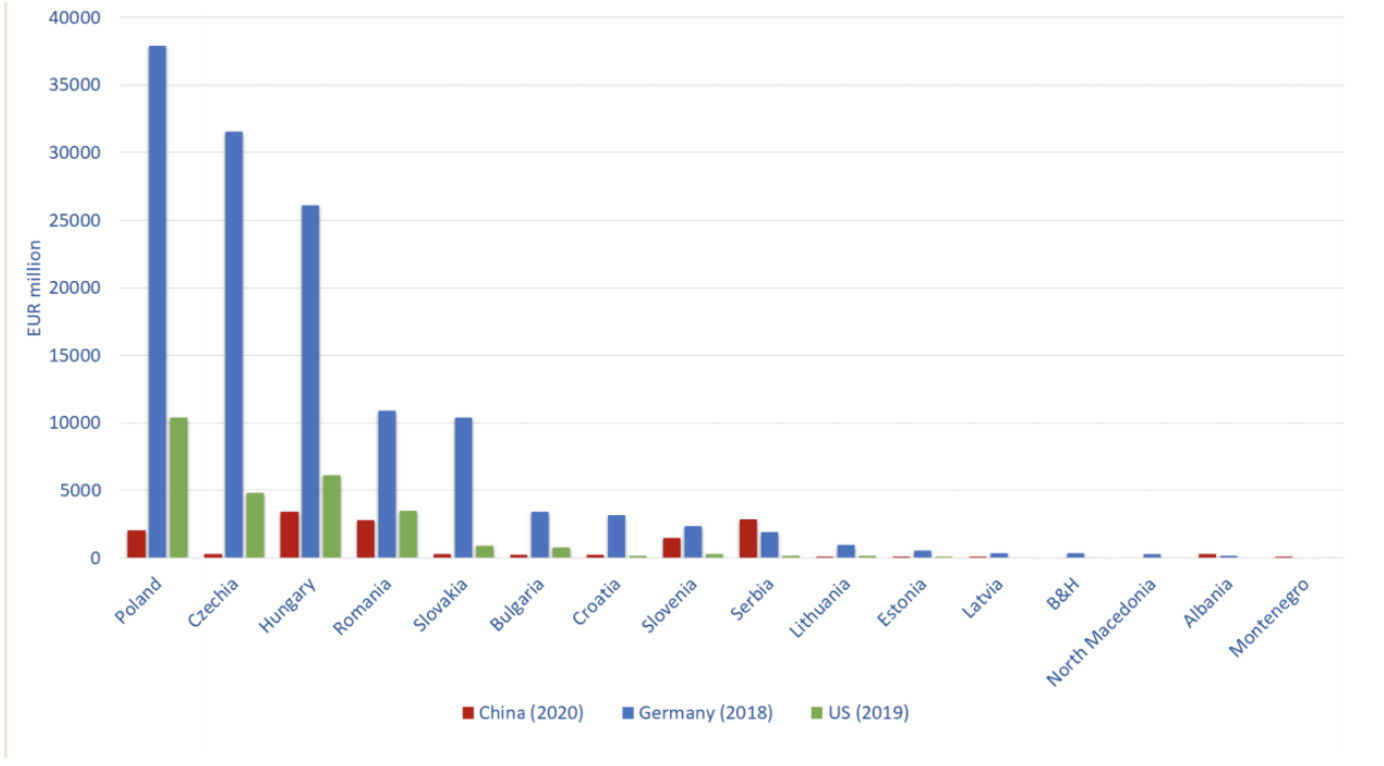 There is a correlation between low FDI and low GDP growth in the region. Despite massive Government stimulus, most Visegrad Four countries had GDP declines in 2020 that matched those of the GFC. While Poland had the least bad economic growth at -2.7%, the others were in the vicinity of -5%. 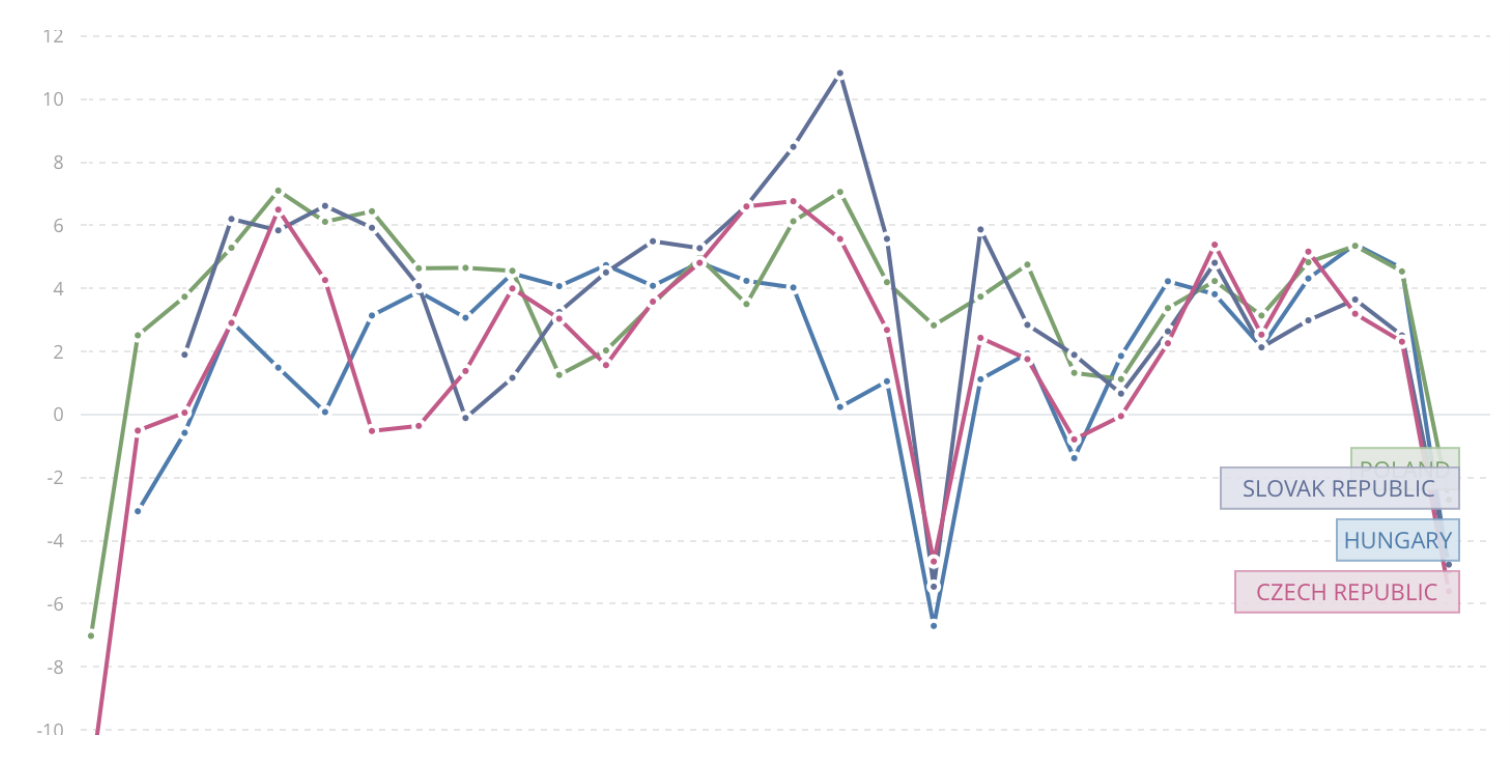 Given the decline of FDI and GDP growth in 2020, the fragility of the economic recovery, the possibility of a fourth wave of Covid-19 in CE, improving FDI levels in 2021 is a key element of recovery in the region, and remains a significant risk factor to GDP growth moving forward. While we might hope that domestic capital formation might assist GDP growth in Central Europe, in the short- to medium-term, CE remains depenent on foreign capital.
1https://datahelpdesk.worldbank.org/knowledgebase/articles/114954-what-is-the-difference-between-foreign-direct-inve 2https://unctad.org/news/global-foreign-direct-investment-fell-42-2020-outlook-remains-weak 3https://unctad.org/system/files/official-document/wir2021_en.pdf 4https://intellinews.com/fdi-inflows-to-cee-down-58-in-1h20-but-rebound-expected-199548/?source=poland 5, 6https://cvca.cz/wp-content/uploads/2020/02/CMS-Emerging-Europe-MA-report.pdf 7https://data.worldbank.org/indicator/NY.GDP.MKTP.KD.ZG?end=2020&locations=HU-PL-SK-CZ&start=1991&view=chart
Back