How is M&A holding up under Covid? By Les Nemethy and Francois Lesegretain

(a) M&A Performance by Geographic Area

While M&A experienced a “near death” experience worldwide in Q2 2020, by Q4, M&A activity even exceeded pre-pandemic levels: 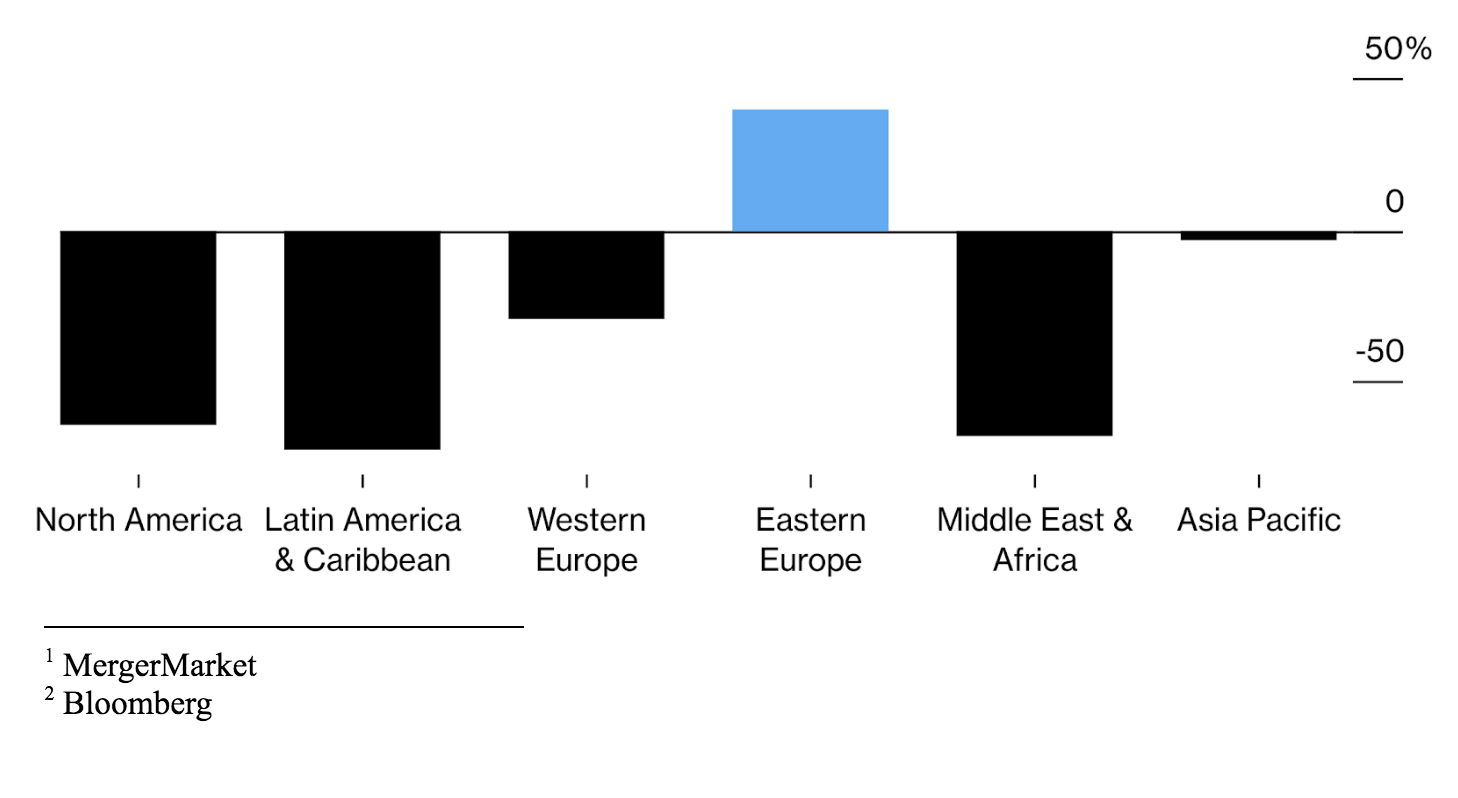 As the graph below demonstrates, even on a population-adjusted basis, Poland and Czech Republic by far outperformed Hungary and Slovakia.

For the other three Visegrád countries there was a sharp decline in both volume and number of transactions.

Exhibit 4: Degree to which foreign investment was responsible for inbound M&A activity in Central Europe6 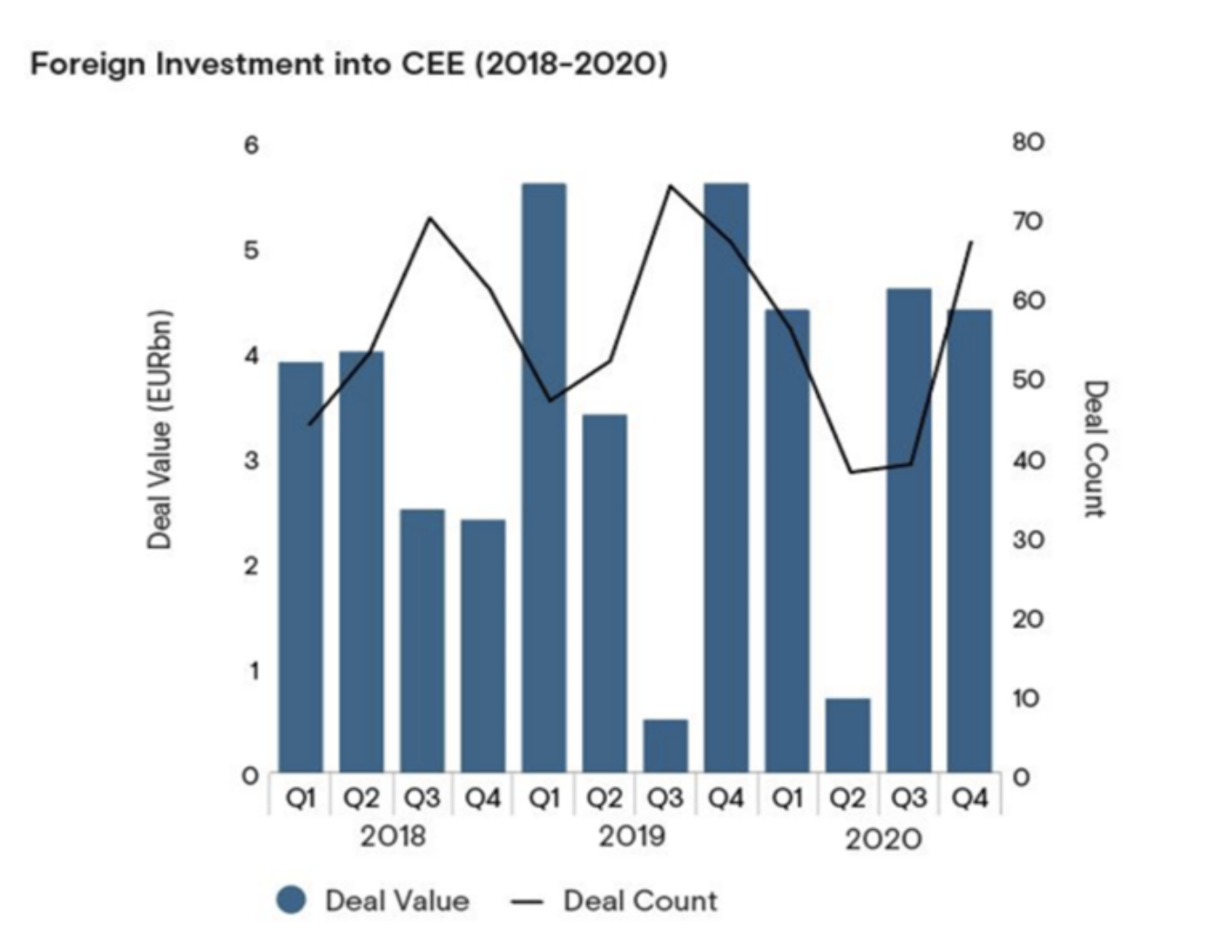 (b) M&A Performance by Sector

The impact of covid-19 has not been the same for all industries. Some sectors have experienced a boom during the crisis and the trend is likely to continue for 2021; other sectors declined and are unlikely to return to normal activity for some time. 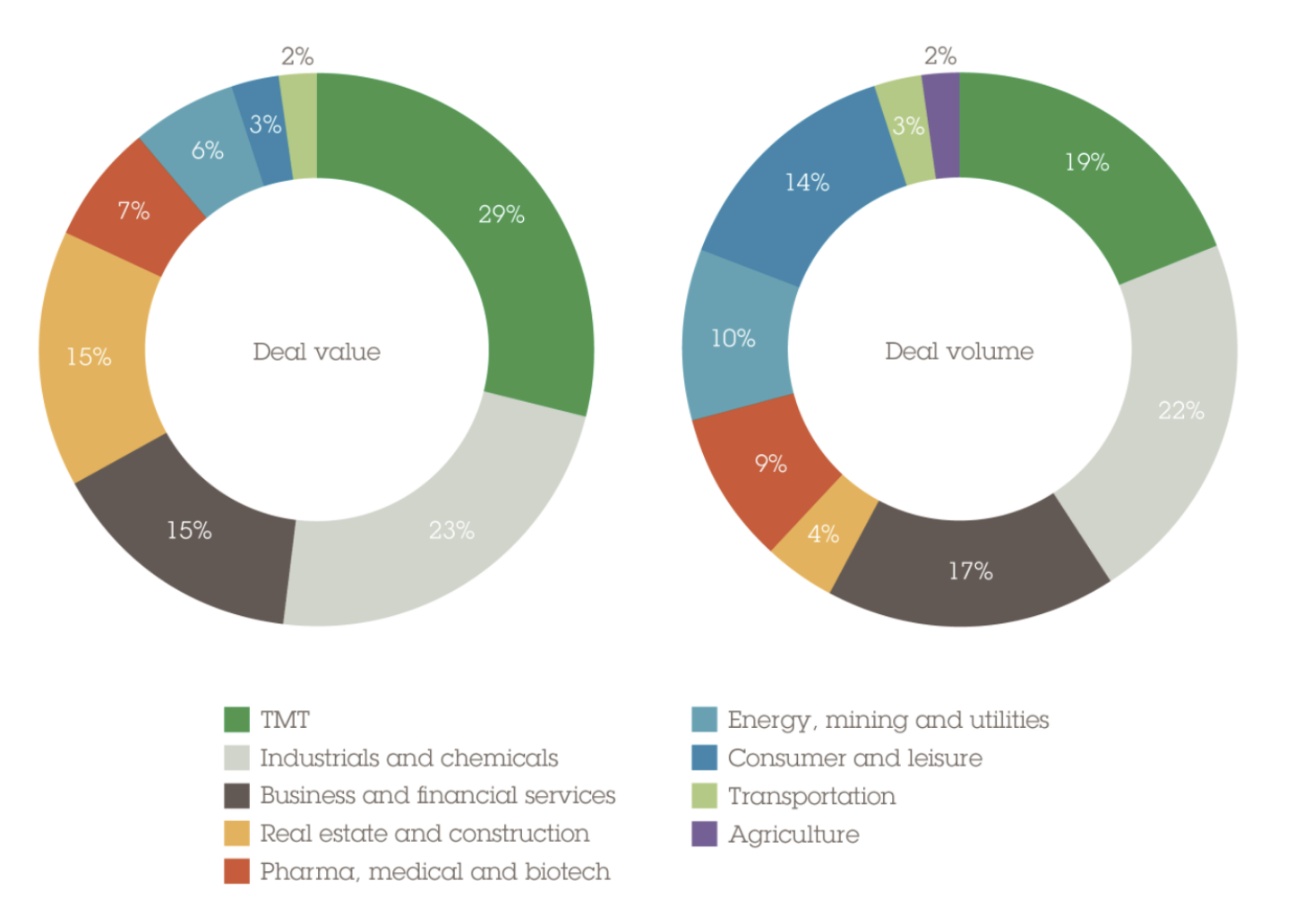 Exhibit 6: Percent Change of M&A activity between 2019 and 2020 by industry in CEE countries10 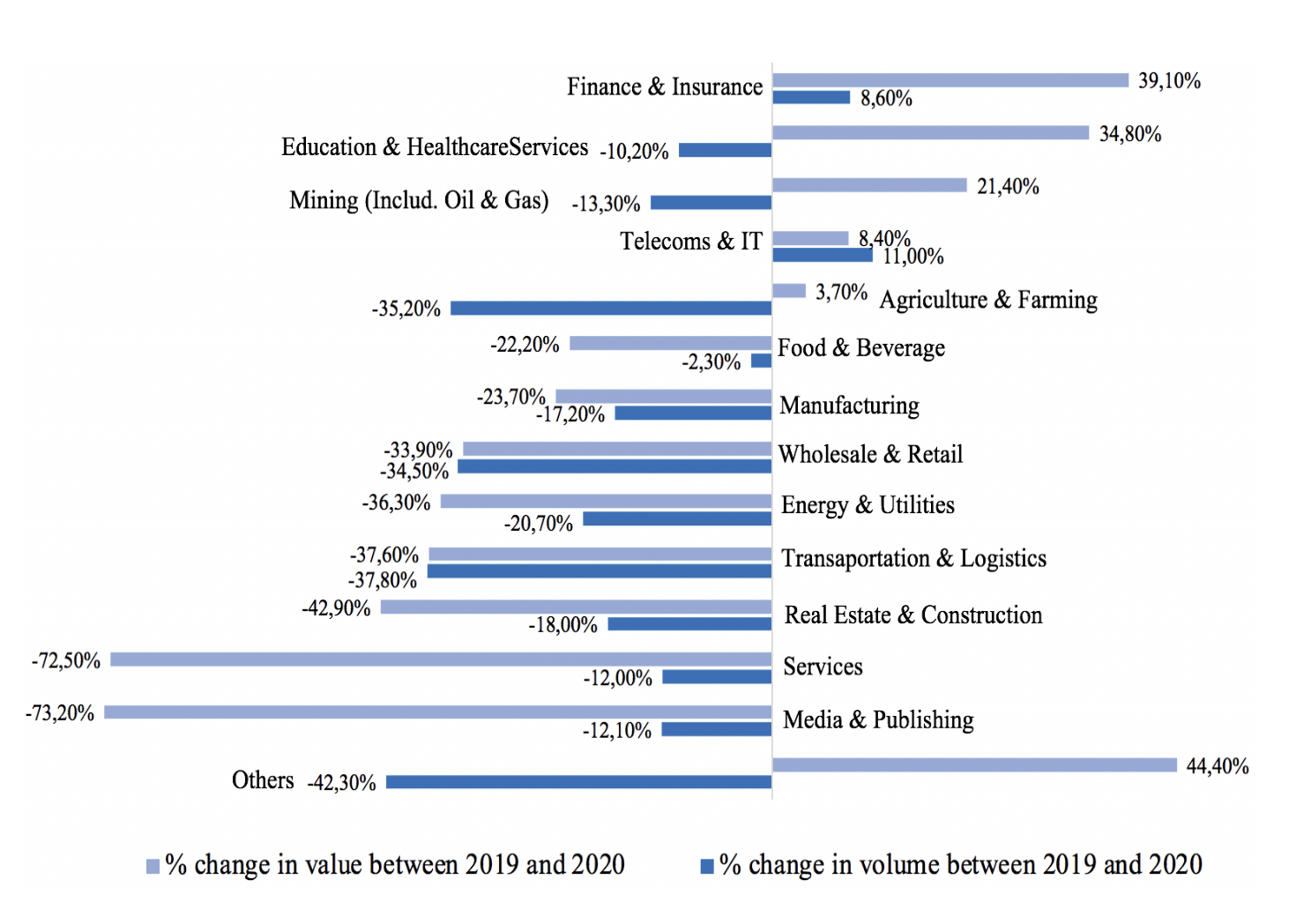 The majority of M&A activity seems to have occurred in the following industries: Telecom Media and Technology (TMT), Industrials and chemicals, Business and Financial services and Real Estate and Construction.

On the contrary, the Agriculture and Transportation industries have suffered a lot during this period with a decrease in deal volume of 35,2 % and 37,8 % respectively compared to 2019. 10

While Enterprise Value/EBITDA multiples have declined in Western Europe over the past few years, they have improved, despite Covid-19, in Central Europe. Although the gap has narrowed, it has not been completely eliminated. 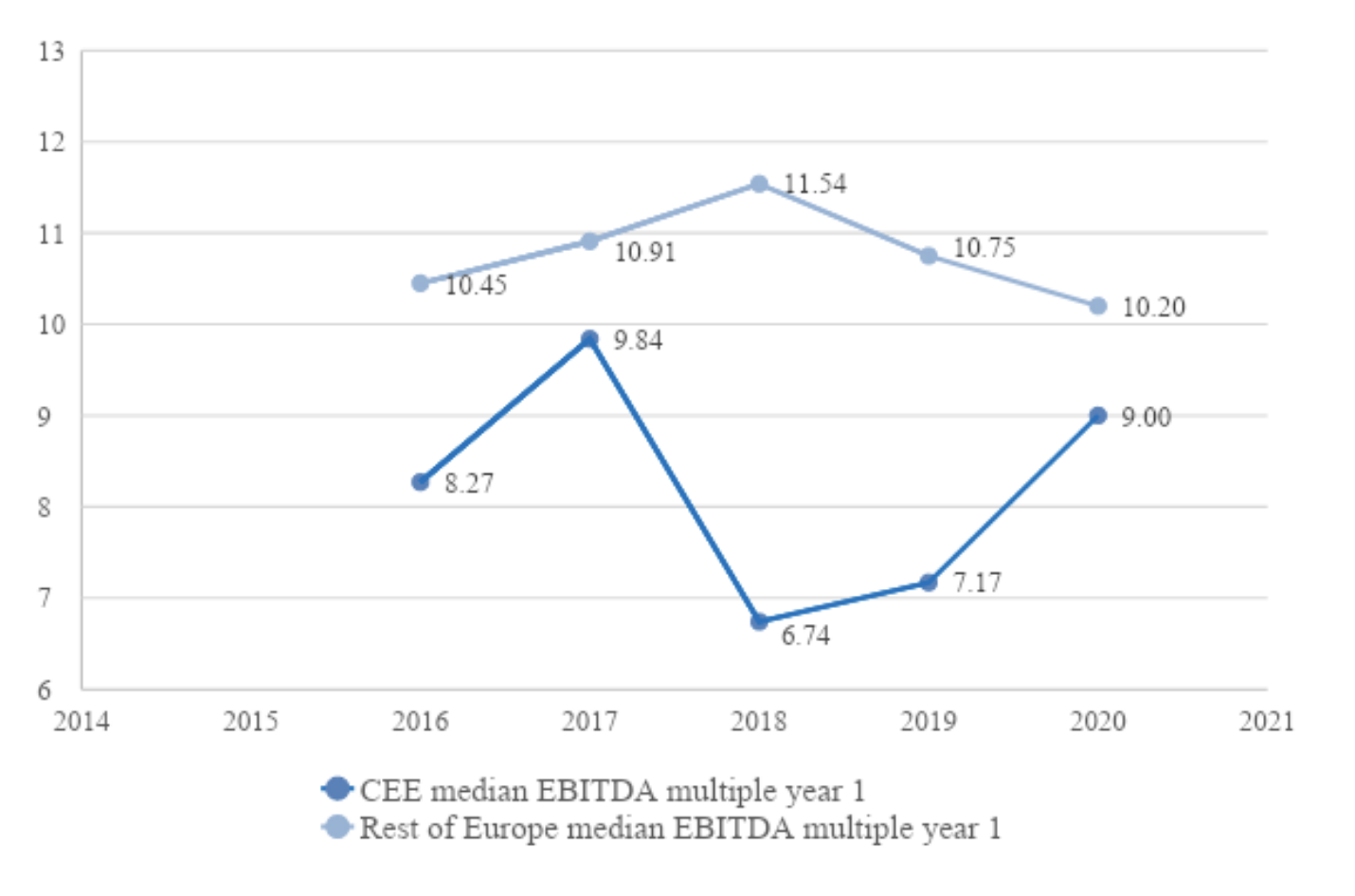 Across Europe, the healthcare and pharmaceuticals sector had the highest median valuation in 2019-20, standing at 15.34x, followed by real estate at 14.39x, and technology at 13.98x. At the lower end of the valuation scale was energy and utilities, with an EV/ EBITDA multiple of just 6.85x, followed by 7.69x for both construction and transport and logistics13.