Despite the world experiencing a humanitarian crisis and approaching Armageddon, some observers are focusing on how much damage sanctions have caused to Russia ; sanctions have devastating effects on Russia; this article focuses on how they are shaking the very foundations of our own economic house.

The Russian and Ukrainian economies together account for only 2% of global GDP; one may be tempted to dismiss the significance of events going on in that part of the world.

Already before the Russian invasion of Ukraine and sanctions, the world was facing
which have taken us to the edge of a huge economic abyss, in relation to which sanctions represent a huge step forward.

The main mechanism by which the West is likely to be affected is via energy prices. Analyst Luke Groman recently stated the US cannot sanction Russian energy without itself risking systemic collapse. Russia is simply too important in the oil and gas market, and supplies roughly half of the EU’s gas.

European gas prices have more than quadrupled over the last year alone and the trend is still practically vertical: 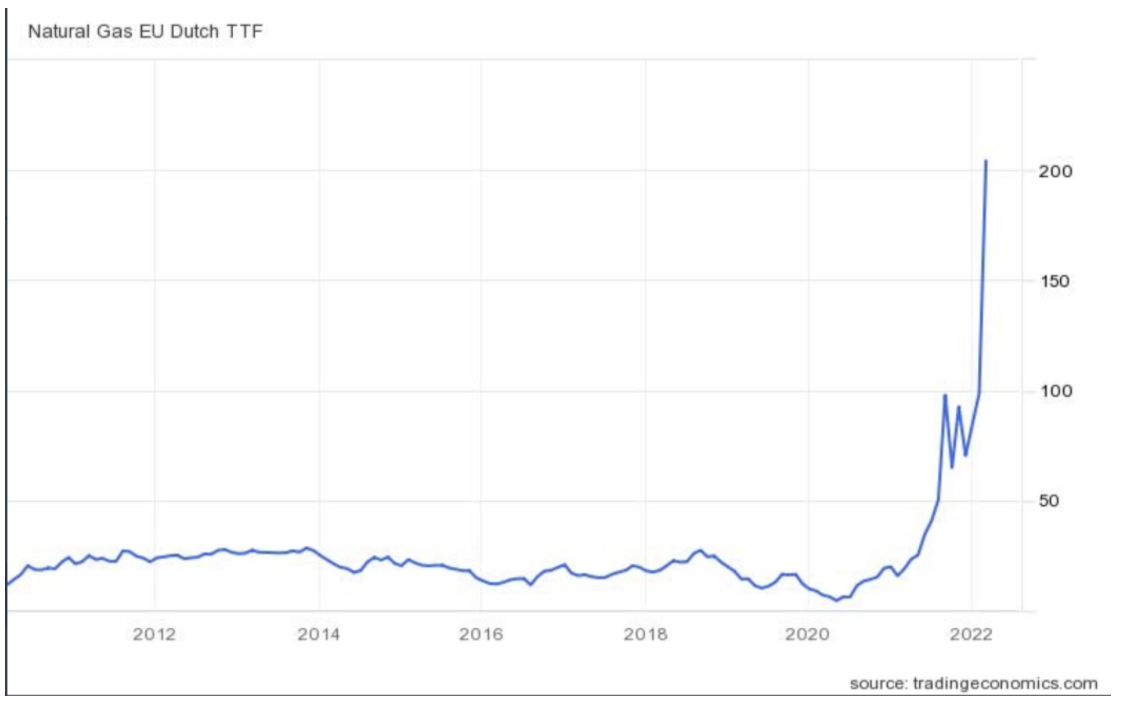 Gas is still flowing through Ukraine, although a Ukrainian pipeline was recently accidentally hit; further north, gas has stopped flowing through the Yamal pipeline, accounting for approximately 15% of Russian gas to Europe. Russian gas flow to Europe could well be more seriously interrupted, or stopped by sanctions.

As the chart below indicates, a more than 50% increase in energy prices has resulted in recession every single time, since 1970. 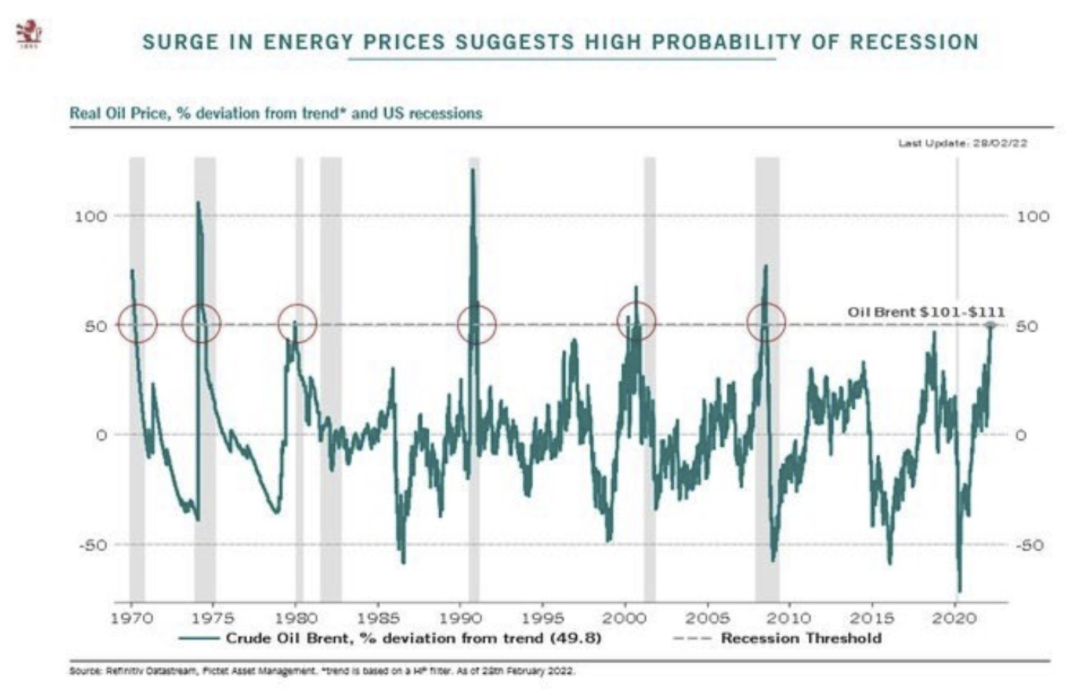 As at date of going to press, the Brent oil price is over USD 130, even higher than the most recent price on the above graph, which leads to a prediction of recession over the coming months.

Energy, as discussed above, perhaps the largest contributor to inflation, but the war causes disruption to supply chains and acts as a catalyst to global inflation at so many other levels as well: High inflation leads to impoverishment of anyone on fixed income and the rise of populist parties. For example, increases in wheat prices triggered the Arab spring and hyperinflation helped sweep Hitler to power.

We may unwittingly further increase damage upon ourselves by restricting trade. Hungary, for example, has decided to stop grain exports. Such bans may provide some price relief at home but ultimately lead to retaliatory actions and supply chain disruptions.

Another area where the Ukrainian invasion may impact on the West is through banks. A handful of Globally Systematically Important Banks have fallen by double digit percentages just in the past week:

Societe Generale owns one of the largest private banks in Russia. OTP bank of Hungary has also seen its share price plummet due to Russian and Ukrainian exposure. Sberbank’s Central European subsidiaries are facing default and liquidation. The European banking system is under unprecedented stress.

A number of major European banks had 30x asset to equity ratios even prior to the Ukrainian crisis—meaning that a 3-4% decrease in asset values has the potential to eliminate equity value.

There are also thousands of investment funds, fund managers and corporations in North American and European that will need to write off or mark down assets. Because Russian financial markets are closed, this process has been slow to begin, but will inevitably accelerate over the coming months.

Although the dollar is currently experiencing relative strength to the euro, (as Europe bears the brunt of energy supply vulnerability, banks, etc.) in the long-term the dollar may also be a casualty. The Chinese no doubt took note of how easily Russian dollar-denominated Central Bank reserves were seized. China and other countries may be expected to further reduce dollar reserves and US dollar denominated trading, reducing demand for US bonds and US dollars.

In conclusion, the economic effect of sanctions is only beginning to be felt. As their effects play out, we are likely to experience rising debt levels, spiraling inflation, bank failures and recession. A combination of high inflation and low or negative growth may lead to a lethal brew of stagflation. Not a rosy picture.
Back