– Ludwig von Mises, Founder of the Austrian School of Economics

In other words, according to von Mises, Governments can turn off the lending spiggots and prick the debt bubble, causing a recession or depression, but if they pass a certain point of no return, a currency collapse becomes inevitable.

This may sound a little dramatic. Is there any possibility that we are heading towards a crack-up boom?

Numerous indicators point towards the most serious debt balloon faced simultaneously by virtually all economies of the modern world : The world has never been more awash with debt. In future, there is even more debt in the picture. To name a few: Evidence of prices on the rise is everywhere: We have an “everything boom”. Well, almost everything.

The US Fed has admitted that we will experience some inflation—but insists that this will be of a temporary nature only. The majority of the world seems to believe this assertion today, because it is on the good authority of the Fed.

But then again, in 2008 the Fed adopted the unorthodox monetary policy of Quantitative Easing (QE), and to allay market concerns, told the world that QE was of a purely temporary nature. A subsequent brief attempt by the Fed to reverse QE in 2013 resulted in a “taper tantrum. Today QE is going stronger than ever. The US Fed and the European Central Bank have each accumulated over $7 trillion of assets on their balance sheet, still growing strong.

My opinion, for what it’s worth: this upcoming bout of ”temporary” inflation will be about as temporary as QE.

Inflation is very much a function of market psychology. Once people expect inflation, velocity of money goes increases because people want to buy or invest their cash before it loses purchasing power. At that point the genie is out of the bottle, there is a natural tendency towards inflation accelerating.

We all know that for years the Venezuelan economy has been heading towards disaster and hyperinflation—notice in the graph below how the Venezuelan stock exchange index is going vertical: 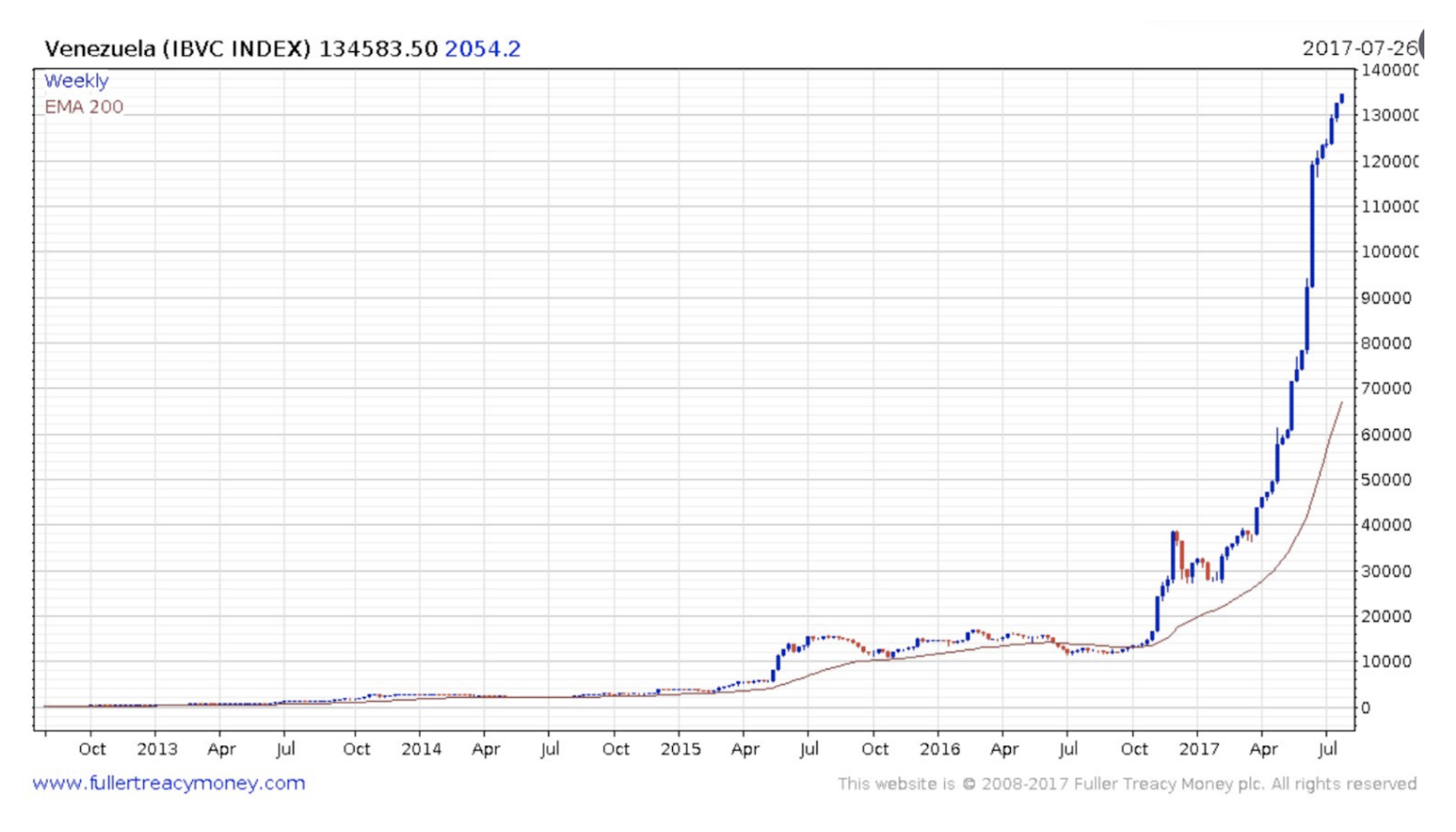 I can’t think of a graph that better illustrates a crack-up boom.

Based on historical example, Austrian economists tell us that the first phases of the crack up boom can actually feel quite good—assets are going up, people who have assets are feeling richer—until the currency collapses. (Some say it’s like sex—it feels best just before the end). The currency collapse drives home the real value of assets. (At times of currency collapse, it is typically gold that best holds its value—in 1923, at the height of hyperinflation during the Weimar Republic—you could buy a large bungalow in ta luxurious suburb of Berlin for 8 ounces of gold).

It seems we are already in the early phases of a crack-up boom. That is not to say the crack up is inevitable, We will move to mid-stage once a majority conclude that inflation is not temporary, at which point inflation will tend to accelerate. As momentum picks up towards indebtedness and inflation, it will prove ever more difficult for Governments to step off the path to currency collapse.

Many of us share a sense that while markets are booming, they are also increasingly volatile and dangerous—which is why the concept of “crack-up boom” has merit, and provides a cautionary message.