Monetary climate change (to borrow a phrase from author and columnist Ron Stoeferle) is happening far faster than environmental climate change. The following chart highlights some of these monetary climate changes: In the past decades we’ve had an enormously positive economic tailwind from globalization. There was a seemingly infinite low labor cost manufacturing base in China, which became the “world’s factory”, creating a global deflationary bias. This process is now reversing, providing a tailwind to global inflation.

In the post World War II era, US percentage of global GDP, imports, exports, etc. has been steadily declining, whereas similar indicators for China have been steadily increasing, overtaking the US on some measures. The world is no longer unipolar; Pax Americana can no longer be taken for granted.

Globalization seems to have reversed gear, as the world moves towards trade blocs. To name a few recent events:

There has been a trend over the past decades towards financialization (e.g. much more rapid growth of the financial economy than the real economy). For example: there is over USD 100 trillion of “paper” gold (future contracts, ETF’s, etc.) and only some USD 7 trillion of real gold. Bullion banks and others have made fortunes via factional reserve trading of paper gold, but if there were a run on gold, there would not be enough real gold to back all the paper gold.

Whereas today global equities are estimated at about USD 115 trillion, the pendulum may swing back towards the 1980 crisis situation, where equities and gold were at comparable levels (each capitalized at about USD 2.5 trillion). Historically, the commodities to equities ratio is at an all-time low: 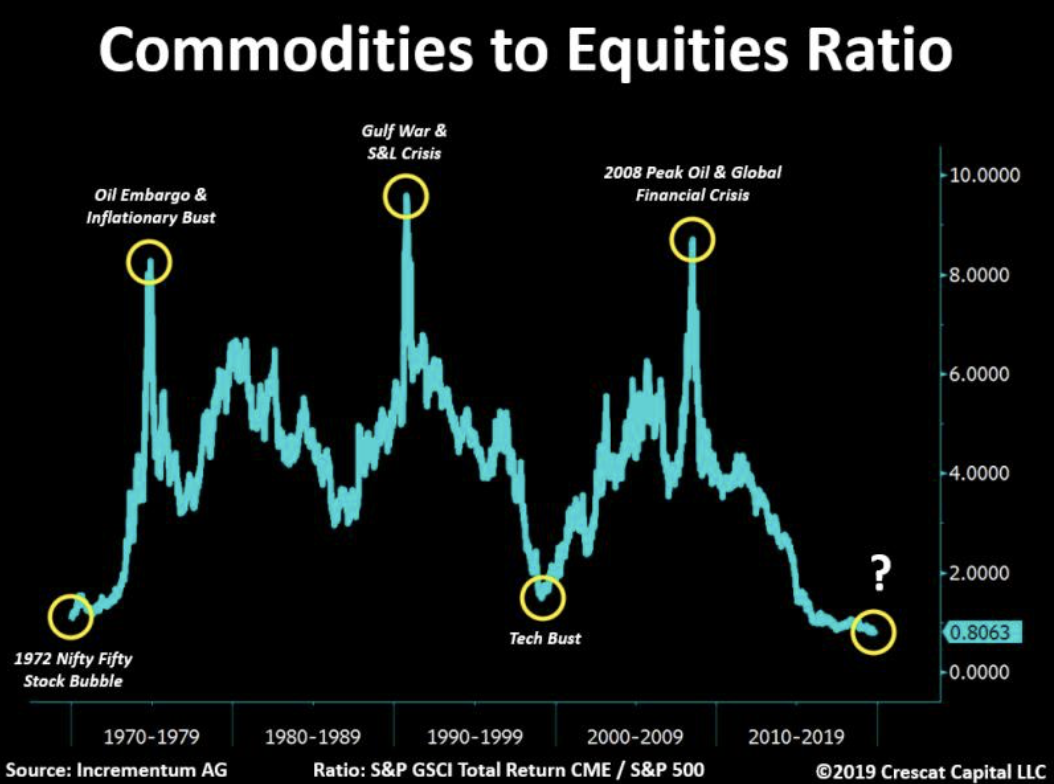 Holders of fiat currencies may lose confidence due to money printing (40% of US dollars were “printed” over the last two years); there are early indications of a trend whereby central banks and investors alike seek refuge in real stores of value (e.g. gold and other commodities).

In summary, we are entering a new monetary era characterized by inflation, negative real interest rates, and the re-emergence of “real” assets, likely a long-term commodity cycle.

Sadly, there is an increasingly common view that central banks are becoming part of the problem rather than part of the solution. Economist Russell Napier believes central banks are irrelevant, because the primary method of monetary expansion is through Government guarantees of bank lending. Financial markets expert Mohammed El Erian believes the Fed, after a number of mistakes, has lost control of the inflation agenda: delayed action against inflation means that the Fed will have to slam on the monetary brakes, causing a major recession, or allow inflation to accelerate out of control. The proverbial “soft landing” is becoming increasingly elusive.

This article is intended for educational and (hopefully) entertainment purposes, not investment advice. Conduct your own due diligence prior to any investment decision.
Back