Risk premium may be defined as the differential in interest rate payable on bonds of a particular country compared to the lowest risk country. Usually, it is the 10-year bond rate that is used as the basis for comparison. For decades, the risk premium of all currencies globally was measured against the US Dollar. More recently, European countries began measuring their risk premiums against the German bond yield1, the lowest risk European country, with an AAA credit rating2.

This article looks at the effect of Covid-19 on risk premiums, with a focus on the Visegrad Four countries. One might have expected risk premiums to increase in developing countries and in Central Europe during the covid crisis of 2020. Let’s look at the evidence.

As can be seen from the charts below, the broad trends show that risk premiums increased in Czech Republic, compared to Germany, but they even declined substantially in Poland, and a bit in Hungary. 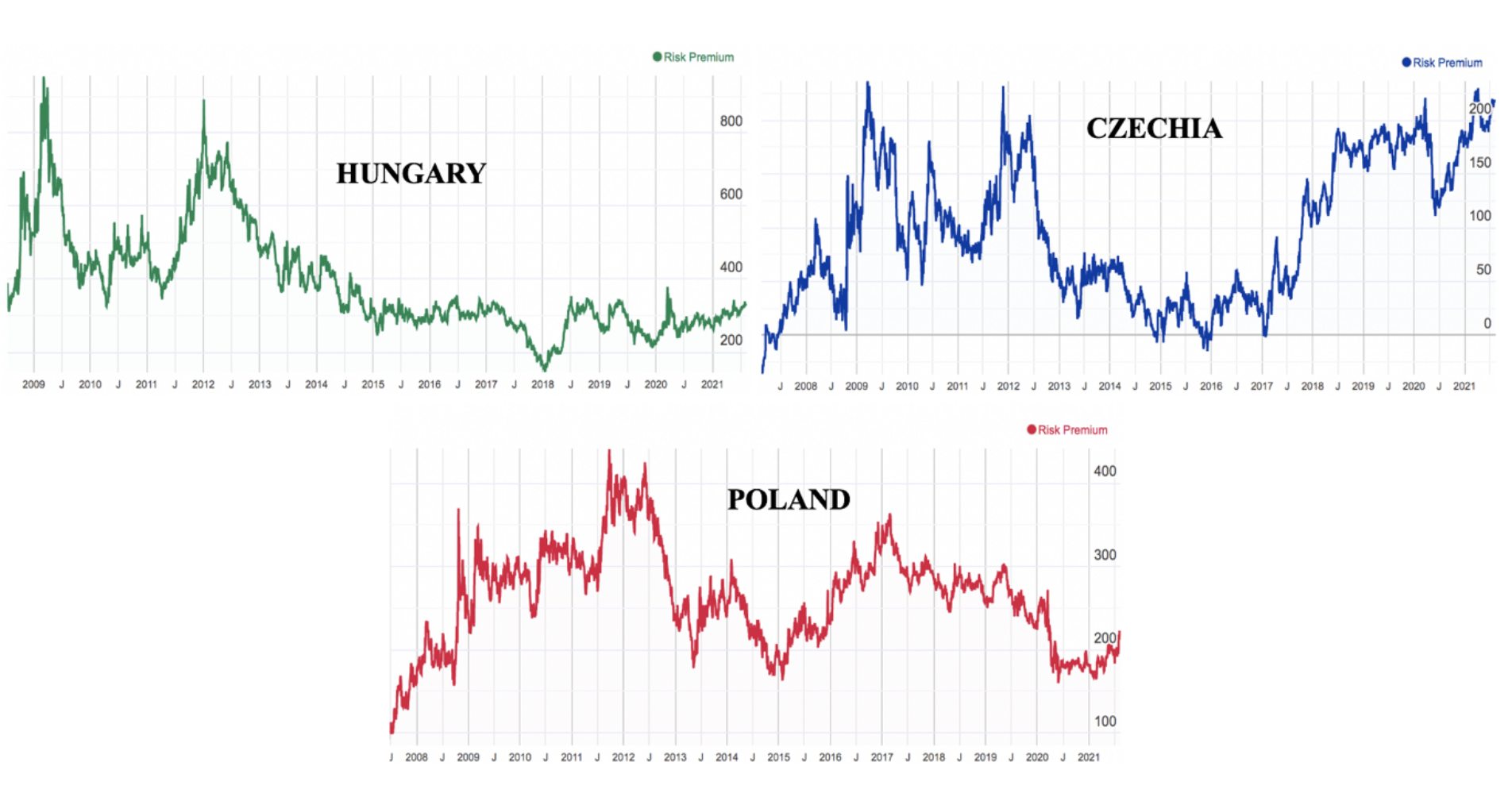 This contrasts greatly to the 2008-2009 crisis where the risk premium for Hungarian 10-year bonds reached a whopping 10% higher compared to German bonds.

It is also interesting to note that globally there seems to have been a greater increase in risk premiums in developing countries than in Central Europe: 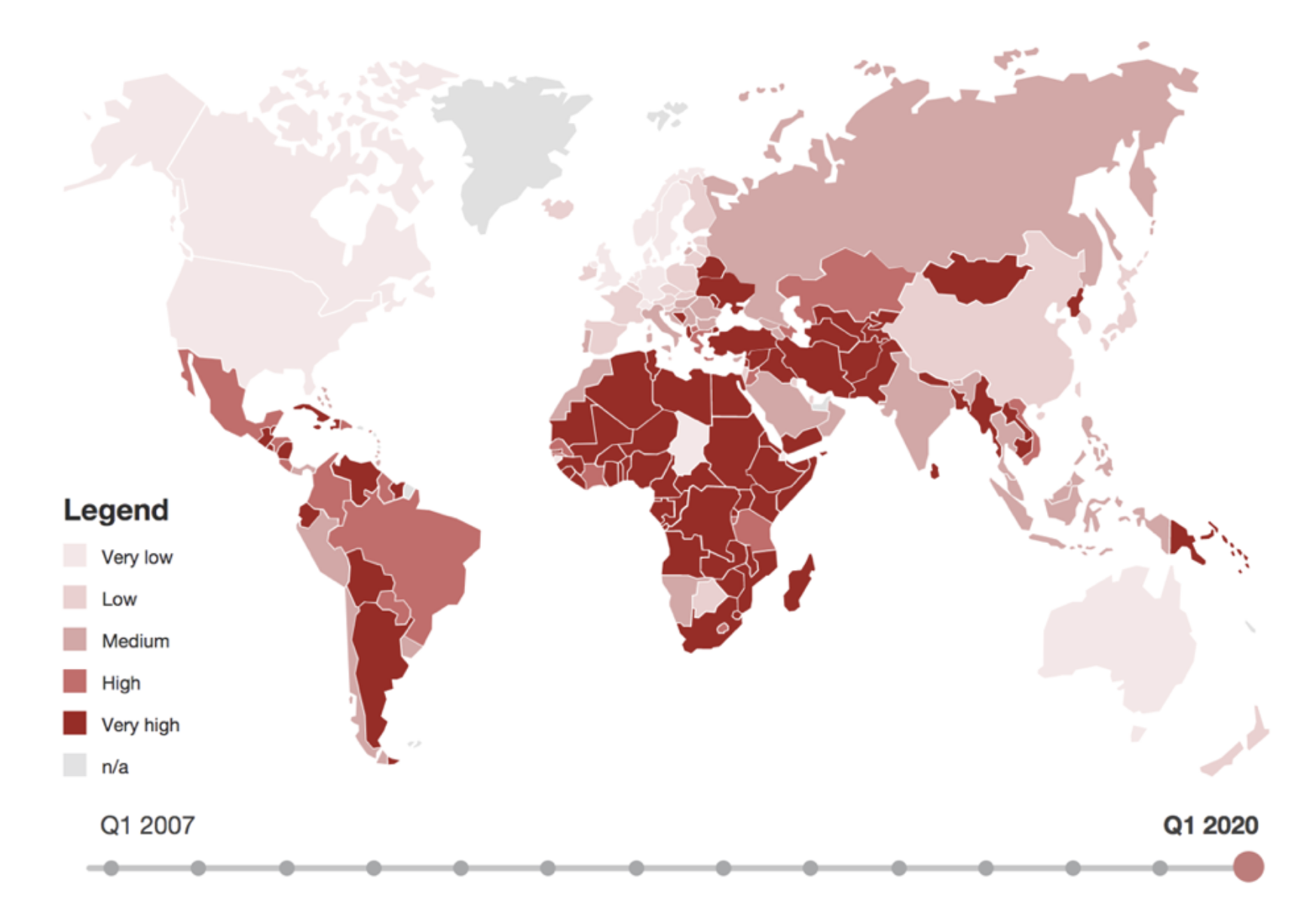 While during Q1 2020 risk premiums increased by on average only 0.5% in Europe, they increased by some 2.7% in North Africa and Middle East (MENA)6. Some emerging markets are likely to have lower fiscal capacity to respond to the shock (less ability to spend their way out of a crisis, delayed access to vaccines, etc.) hence are more vulnerable to a broad-based economic downturn.

One does not have to look far for an explanation on the behaviour of risk premiums. The European Central Bank (ECB) has had a massive effect on dampening the severity of the covid-19 crisis, thanks to quantitative easing. The ECB also announced the formation of the Next Generation EU (NGEU) fund, a massive EUR 750 billions of spending. Even though the NGEU is only in early stages of disbursement, the expectation of this stimulus also had an effect on buoying markets. As can be seen from the chart below, European GDP are expected to bounce back quite well in 2021. 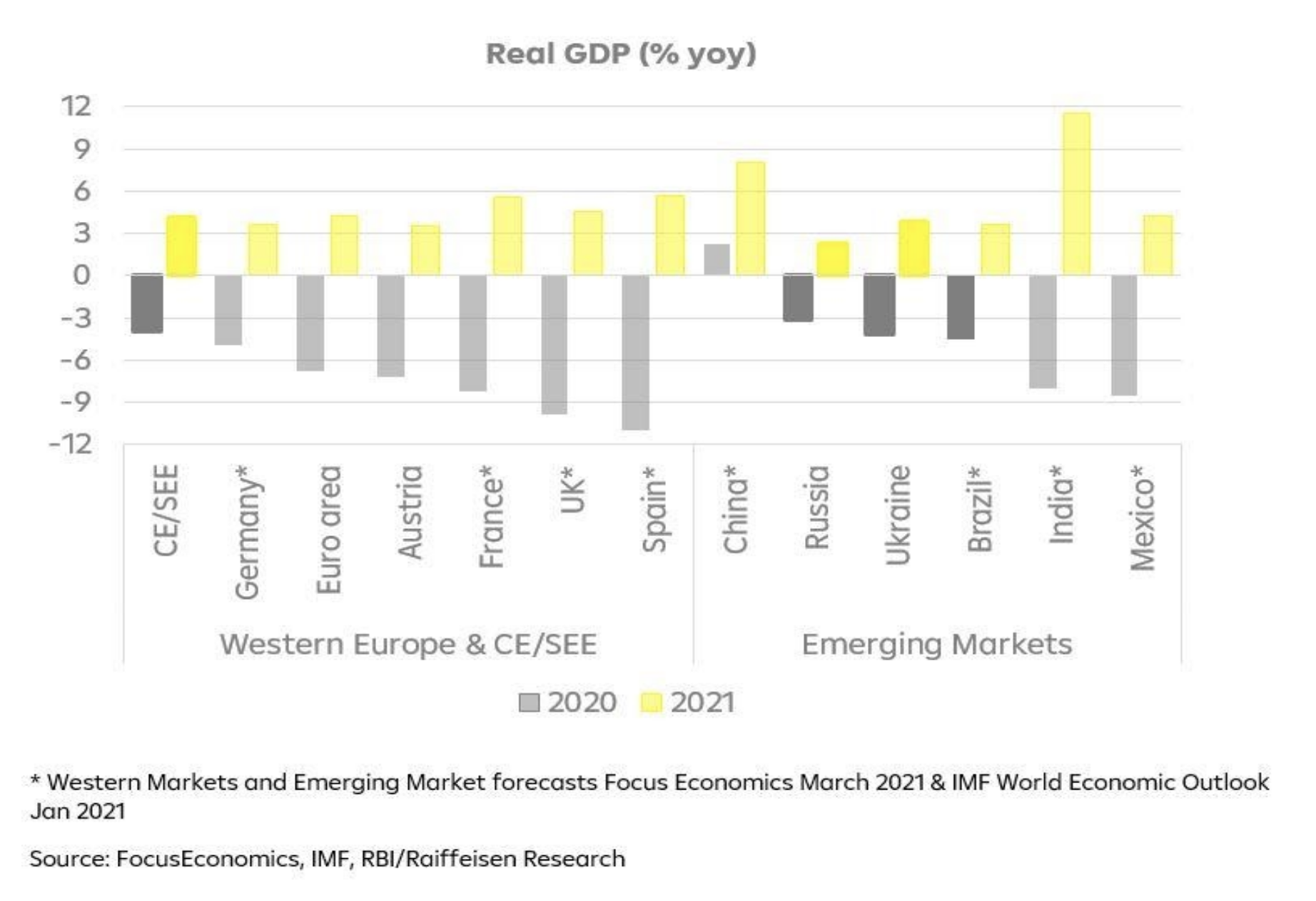 The allocation of the EU Recovery Fund or Next Generation EU (NGEU) instrument remains very supportive for the EU member countries from Central and Southern Europe. About 20% of the grants and guarantees under the NGEU should go to this group of countries, while their EU GDP share stands at just under 10%. This is good news as the region clearly benefits from redistributive elements within the NGEU. (It should be borne in mind that parallel to the NGEU, there has been a decline in grants and guarantees destined by the EU to the region, from EUR 100 to EUR 80 billion, which still represents some 6-7% of regional GDP for 2020. The net effect is still extremely positive for the region.

In conclusion, Covid-19 has not been disastrous on the CEE country risk premium and cost of capital. The ECB (like the US Fed) has been much more stimulative than during the financial crisis of 2008, which has had a beneficial effect not only in reviving economic growth, but also tamping down risk premiums.

However, there is no free lunch: as discussed in earlier articles, the massive level of stimulus in the developed world, including Europe, could well lead to a period of inflation or stagflation. Central banks have shown a certain success in tamping down risk premiums in the short run. But will the stimulus lead to inflation? The jury is still out, but there is a good chance that it will be more than transitory.
1https://www.ecb.europa.eu/pub/pdf/other/art1_mb201407_pp63-77en.pdf
2https://www.theglobaleconomy.com/Germany/credit_rating/
3https://countryeconomy.com/risk-premium/hungary
4Data for Slovakia was unavailable
5https://www.pwc.com/gx/en/research-insights/economy/country-risk-premia-quarterly-update.html
6https://www.pwc.com/gx/en/research-insights/economy/country-risk-premia-quarterly-update.html