In 1994, James Carville, a Clinton advisor, stated he’d like to be reincarnated as the bond market, because “you can intimidate everybody” . The UK gilts crisis has intimidated with a vengeance. As Former US Treasury Head Larry Summers famously recently stated: the “UK is behaving a bit like an emerging market turning itself into a submerging market.” In 18 months, 30 year Government Bond (gilt) yields have quadrupled, with most of the acceleration happening over the past six months: 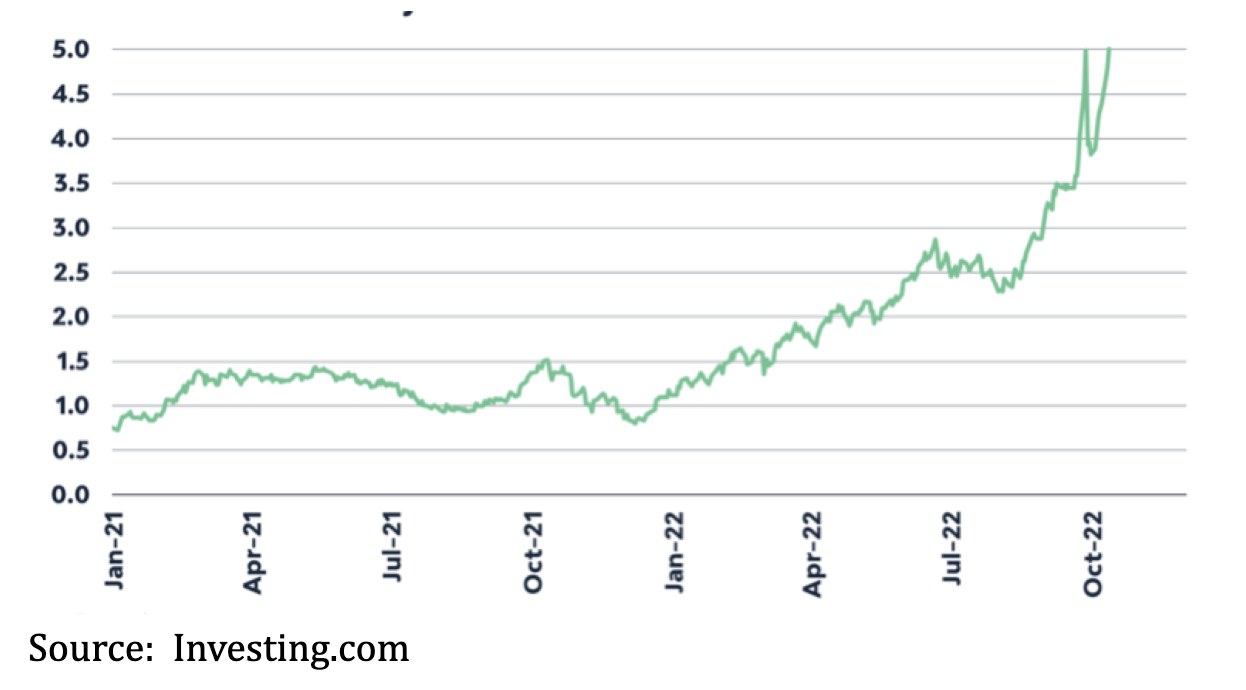 You might argue that the UK is a special case. Brexit caused a loss of trade markets, accelerated London’s decline as a financial center, destroyed investment and confidence and took the UK to the edge of a precipice. The Truss Government’s pushed it over the edge with a very ill-advised budget. An optimist might say that this is a “one off” crisis, with little chance of occurring elsewhere. In this article, I will first talk about recent global developments, and then provide a brief analysis of why, in my opinion, the UK gilts crisis may be a harbinger of things to come.

Some of the messages coming from major national and international institutions have shown both inconsistency and a rapid deterioration in outlook:

It is remarkable that Janet Yellen would make such a strongly optimistic statement on October 11, 2022, the same day as the IMF issues a very negative picture, only to flip flop the next day. That goes to credibility…

The upcoming perfect storm that is brewing stems from the confluence of many inter-related factors:

The world has, in the past, dealt with a few of these at a time, but never with all of these factors at once. Despite global markets being increasingly integrated, there is no evidence of coordination between Central Banks. Because of high inflation and tight job markets the US Fed may well continue tightening, at least a few hundred more basis points.

The following chart show that since the Great Depression, there have been only three years, including 2022 year-to-date, where both equities and bonds had negative returns: 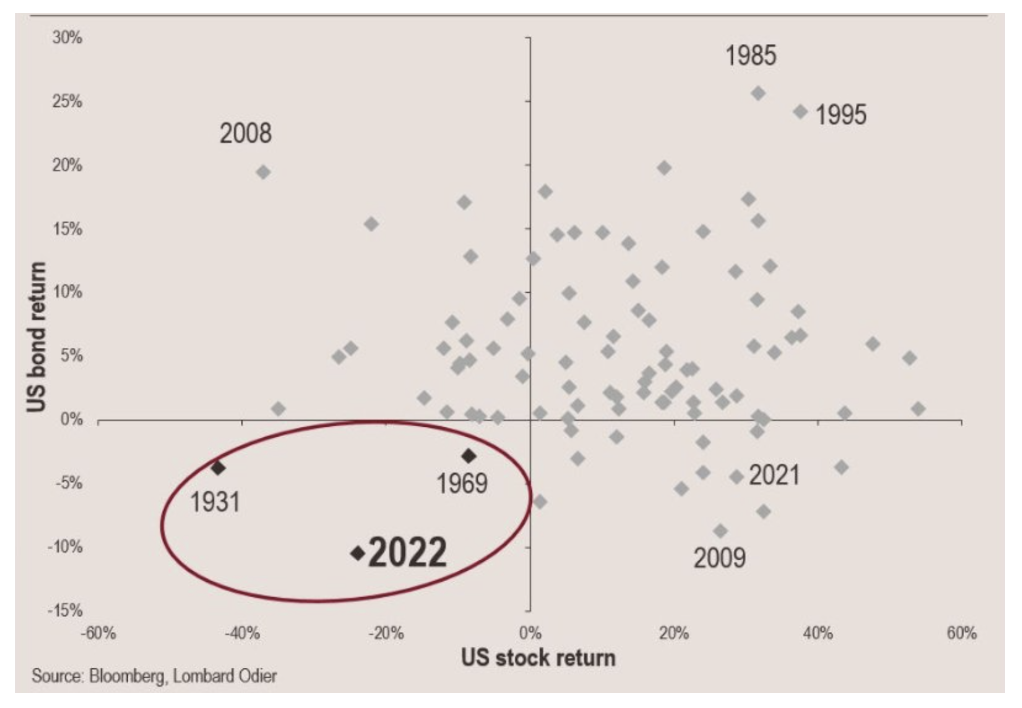 Furthermore, the first three quarters of 2022 have given the worst performance of any comparable period for bonds, as well as for a 60/40 portfolio of equity and bonds, in the past century–worse than during the Great Depression.

Exhibit 3: Performance of a 60/40 Portfolio through First Three Quarters 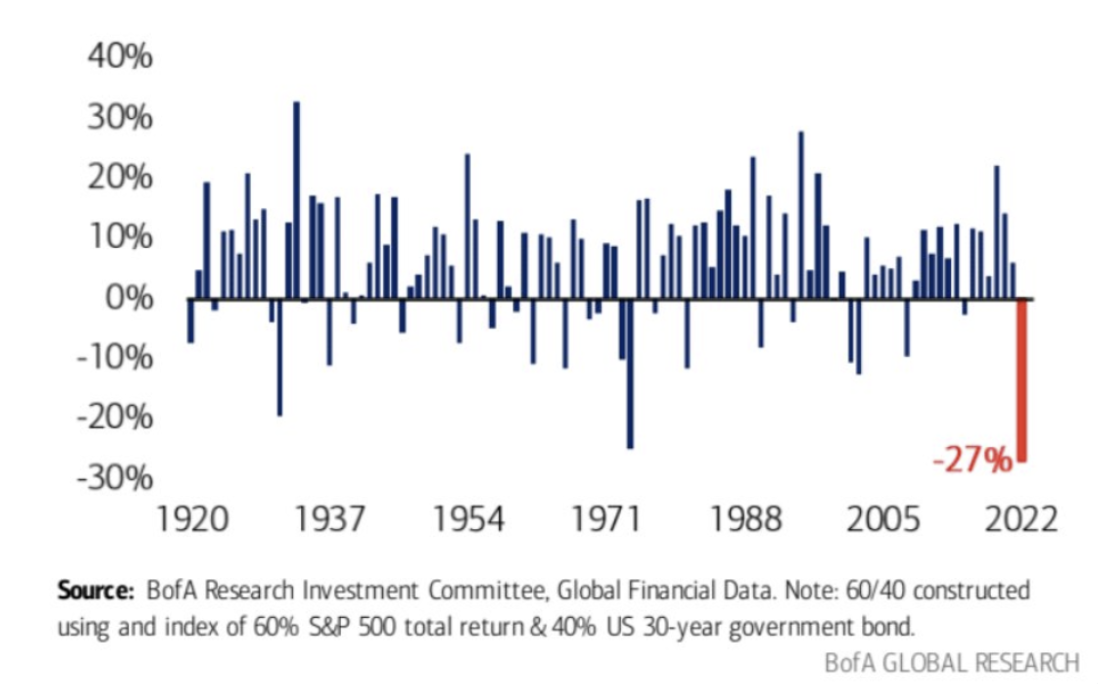 Now to come back full circle to the UK gilts crisis: the main reason the Bank of England had to suddenly change gear from Quantitative Tightening (QT) to Quantitative Easing (QE) was to save the UK pension industry, which risked being completely wiped out by the sudden spike in yields. Pension funds must make fixed payments on Defined Benefit pensions, and given the low-yield environment since 2008, they have shifted into ever riskier investments to generate sufficient yield to service payments. Given the recent quadrupling of yields, bond prices come tumbling down. Not only do lower bond prices make it more difficult for pension funds to make payments , which goes to solvency, they must also maintain regulatory liquidity ratios, which forces sudden liquidation of assets, driving bond prices further down, creating a vicious circle. Hence, the Bank of England needed suddenly reverse from QT to QE, in order to prevent an entire generation of pensioners from being wiped out financially.

(b) A harbinger of things to come?

Pension funds are experiencing similar issues globally. The largest pension industry in the world is in the US ($34 trillion), which is experiencing similar, albeit for the time being less drastic liquidity issues than the UK. Yields are expected to continue to surge, which would drive bonds and equities lower, potentially creating a UK scenario. Could the pension industry become the Achilles heel of the US economy, similar to mortgage-backed securities in 2008-2009? Financially wiping out pensioners is something no Government can politically afford.
Back