Where are US markets? Where are they heading? By Les Nemethy, CEO, Euro-Phoenix Financial Advisors Ltd., former World Banker

According to Bloomberg, the current decline in Nasdaq market cap has exceeded that of any recent crisis: Compared to the absolute numbers above, the Exhibit below gives a relative perspective on the S&P 500: 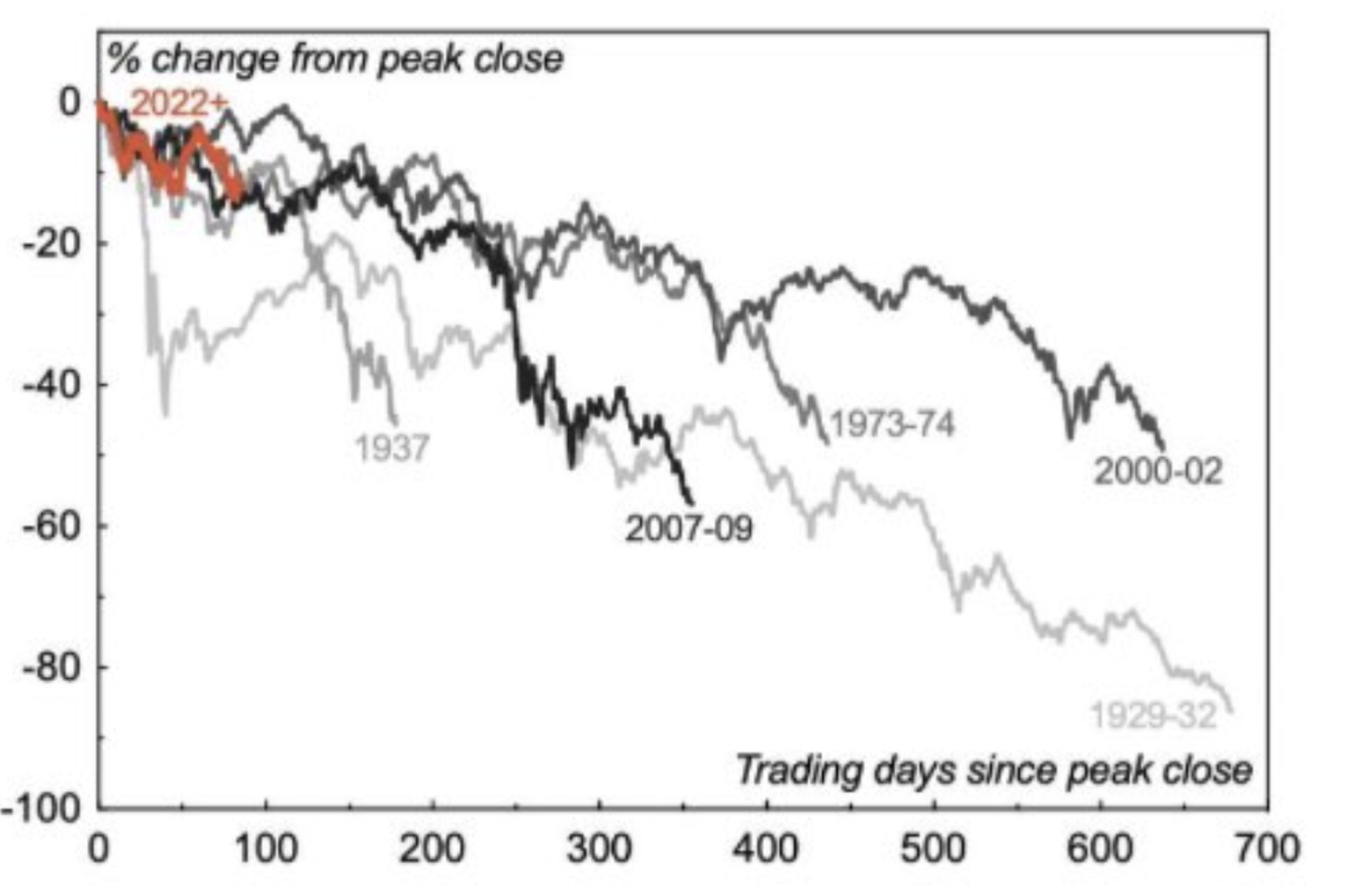 Clearly there is plenty more room for further decline.

The value destruction is due to several factors: the ongoing war in Ukraine, Covid lockdowns in China, but perhaps most importantly, the Quantitative Tightening (QT) program initiated by the US Fed. Interest rates have risen considerably over the past few weeks, with the Fed setting expectations for even more rate rises.

Whereas in previous crises, the Fed tried to actively stem crises, currently it seems to pre proactively inducing the crisis. The Fed seems to view value destruction as the price to pay for taming inflation (e.g. by cooling demand). This approach has perhaps not been seen since Volcker in 1980.

Although the Fed has tanked financial markets, it has far from cured inflation! Inflation is a stubborn beast. A monetarist economist would say that the 40%+ rise in M2 over the past two years will persist in causing high inflation for at least the coming year or two. Even most Keynesian economists would say that extremely tight labor markets with rising wages, as well as supply side bottlenecks (especially in energy and agriculture) are likely to cause continued high levels of inflation.

The question on every economist’s tongue is whether QT will induce another recession in the US, or whether the US Fed can engineer the proverbial “soft landing”. For the time being, consumer borrowing and spending in the US remains strong (although these are always reported with a bit of a lag). In my opinion, the landing may be very hard if the Fed follows through on its agenda of killing inflation, as inflation seems less sensitive to interest rate increases than economic activity, given record levels of indebtedness.

Powell himself has recently acknowledged that whether the US achieves a soft landing is out of the Fed’s control. It sounds as though the Fed itself has diminishing confidence in a soft landing scenario.

Note in the chart below that over the past 20 years there is a downward trend in maximum interest rates reached before monetary easing is required—attributable to vastly increasing debt levels. 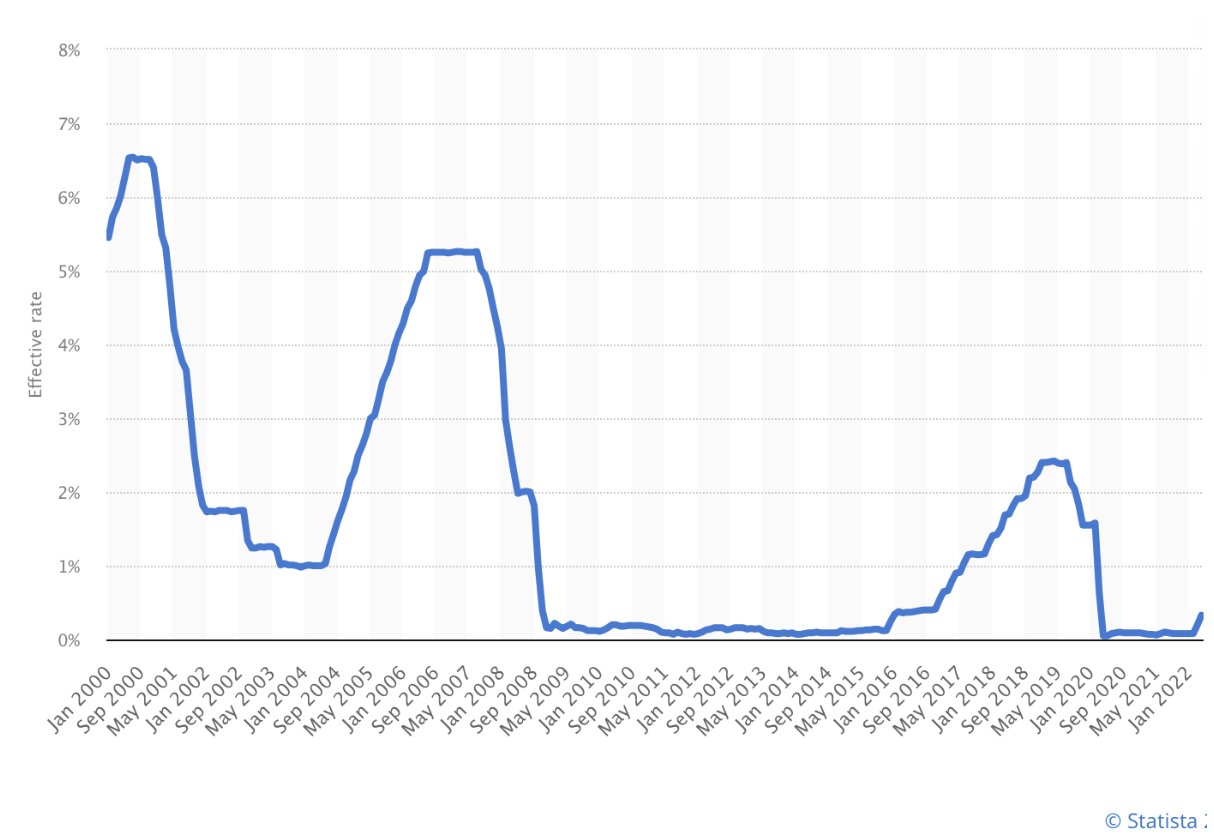 Q1 2022 stats in the US showed nominal economic growth of -1.5%, while inflation increased to 8.5%. Stagflation is already here!

In my humble opinion, the likeliest scenario is that the Fed will continue monetary tightening (perhaps two or three more interest rate increases, not the seven recently forecast by the Fed) until something breaks—or the Fed decides to pivot again. Given record debt levels, rescuing the economy from the next crisis may require a quantitative easing (QE) scenario that dwarfs previous ones—another precipitous drop in interest rates, probably even into negative territory. This may trigger a broad rally in both stocks and bonds.

This starts to sound dangerously close to what Ludwig von Mises calls a ‘crack-up’ boom, which is then followed by an even larger collapse:

It seems that the cooling inflationary forces would require QT of a magnitude that would induce a fairly severe recession, whereas the Fed is targeting a “soft landing” (e.g. is trying very hard to avoid a recession). Given the low pain threshold and lack of political will to tolerate a recession, I see it likelier that the Fed will revert to QE at the first sign of crisis, meaning that a recession may be avoided or only be minor. The next Fed rescue may well come at the cost of inflation not being subdued, and then the larger issue becomes credibility of the currency.

This article is for educational purposes only and must not be construed as investment advice. Investors should obtain their own financial advice.
Back