Debt Levels: Have we learned the Lessons of 2008?

Figure 1: Total Global Debt as a Percentage of Global GD 3 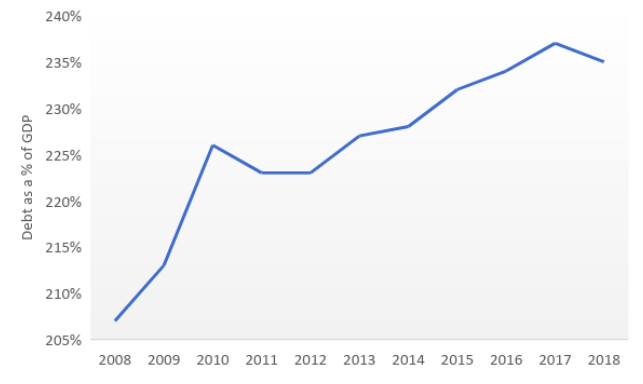 One of the most basic principles of finance is that leverage is always correlated to risk. Hence systemic risk in the global financial system is considerably higher today than it was in 2008. That’s not to say that a recession or depression will happen tomorrow. But it does mean that the global economy is less able to withstand shock, should one arise.

Financial shocks can come from unexpected places. In 2008, the financial shock came from subprime debt. It was like the spark that set off the tinder keg. Before 2008, most people hadn’t heard of subprime debt, and to the best of my knowledge, no economist had predicted that this could trigger a financial crisis.

It is not possible to predict the origin of the next financial crisis. It might be triggered by the current trade war, loss of confidence in a particular Government, a war, the failure of a financial institution, or a combination of the above. Or it might come from a totally unexpected source. Whatever the source of the shock, the higher the levels of debt, the more likely that there will be conflagration and contagion.

Because there is likelier to be conflagration and contagion at those pressure points of the global economy where debt levels are highest, for the remainder of this article I will focus on breaking down global debt, to identify places where risk is greatest. 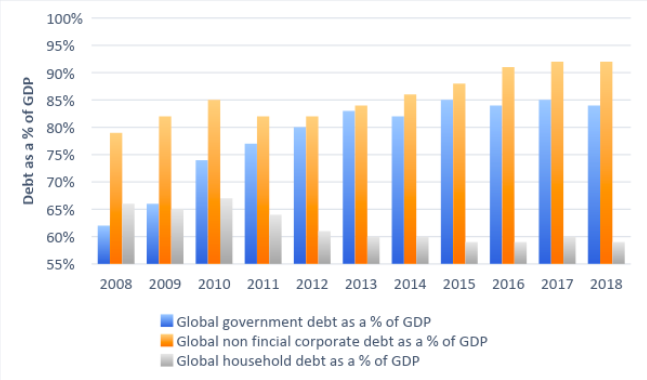 And yet, in 2008, the general conclusion was that debt levels were way too high, and should be paid down in order to make the world a more stable place. Instead, Governments and corporations have continued to pile on debt. They have not learned the lesson of 2008. We’ll now examine Government, corporate and household debt in more detail.

As the chart below demonstrates, it is the Japanese and Chinese Governments that has piled on the most debt, although the Chinese debt levels started from a much lower base in 2008:

Figure 3: Comparison between the 2008 and the 2018 Government debt as a percentage of GDP6: 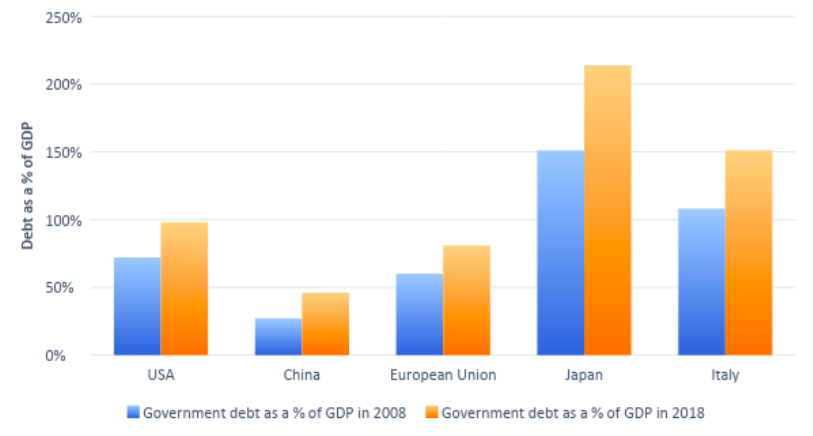 You might say that a Government can never go bankrupt—they can always print more money. But a Government may default where debt is denominated in foreign currencies. The likelier scenario is that in the event of a crisis, Governments will need to pay significantly higher interest rates to sell bonds. The US Government currently pays about 8% of its budget to service debt 7, and this is with extremely low interest rates. What if the US Government had to triple its cost of servicing Treasuries during a recession, when tax revenues are falling? Ouch!

Here again, China has been among the most profligate, with the European Union also showing healthy increases in debt:

Figure 4: Comparison between the 2008 and the 2018 Nonfinancial corporate debt as a percentage of GDP8:

It should be borne in mind that the Chinese economy has been the fastest growing major economy in the world, more than doubling over the 2008-2018 period, to become the largest economy in the world on a Purchasing Power Parity basis, so the fact that Chinese corporate debt has increased by over 50% relative to GDP points to a truly staggering level of debt growth with Chinese corporations. This is particularly worrying where state owned banks are lending to state owned corporations, as well as lightly regulated non-bank financial institutions accounting for so much lending.

According to Fitch Ratings, $500 billion of US bonds are just one downgrade away from junk bonds. If downgraded, this would create major losses for investors, potentially creating a vicious circle of investors withdrawing funds from the bond market, further driving up interest rates, etc.

Household debt has generally been decreasing in most economies of the world—with the dramatic exception of China (which once again, started with a relatively low base in 2008). 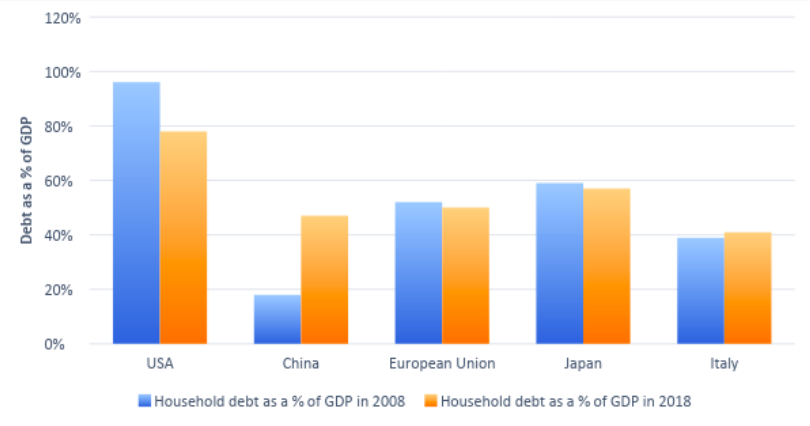