The Case for Gold as an Investment Part II of III: Global Supply and Demand for Gold by Les Nemethy and Sergey Glekov

Part I of the series tackled the value of gold as a portfolio hedge. This article, Part II of the series, will discuss the very limited stock of gold within the world , and the supply and demand of gold, elements an investor should also understand before investing is gold.   This article (and also part III) will highlight the low stock and supply of gold, coupled with possible spikes in demand, that have the potential to create substantial appreciation in gold prices. (a) Supply The total amount of gold mined in the history of the world is approximately 193,000 tones1.   Estimates of the global amount of gold differ: a recent BBC article estimates it at 171,300 tonnes2. This represents a cube of 20.7 meters on each side – when you think about it, an incredibly small amount! Furthermore, there does not seem to be that much new supply coming onto the market – only about 3,000 tones per year (in addition to a smaller amount that is recycled): Exhibit 1: Gold supply: mine production vs recycled gold, tones3 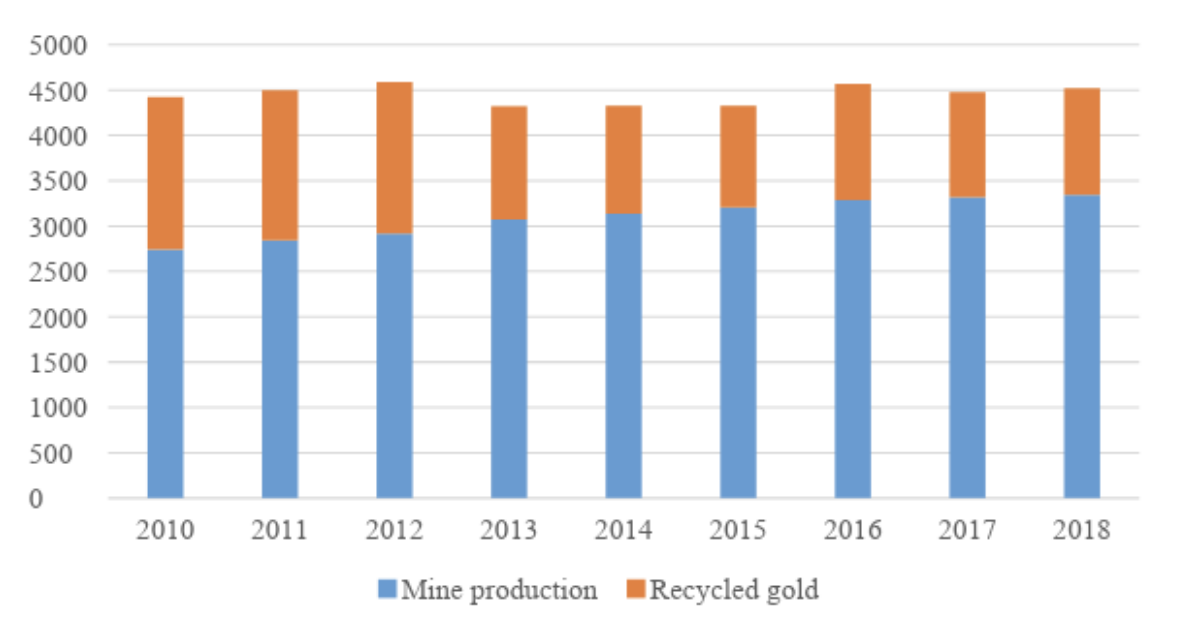 The amount mined is quite constant. Against that backdrop, the US Geological Survey estimates there are only 52,000 tonnes of minable gold in the world4.  Of course, more could be identified, but environmentalists are also making it much more difficult for new mines to be approved. The production by country in 2017 is segmented in the chart below: Exhibit 2: Top 10 Gold producing Countries in the World in 2017, tones5 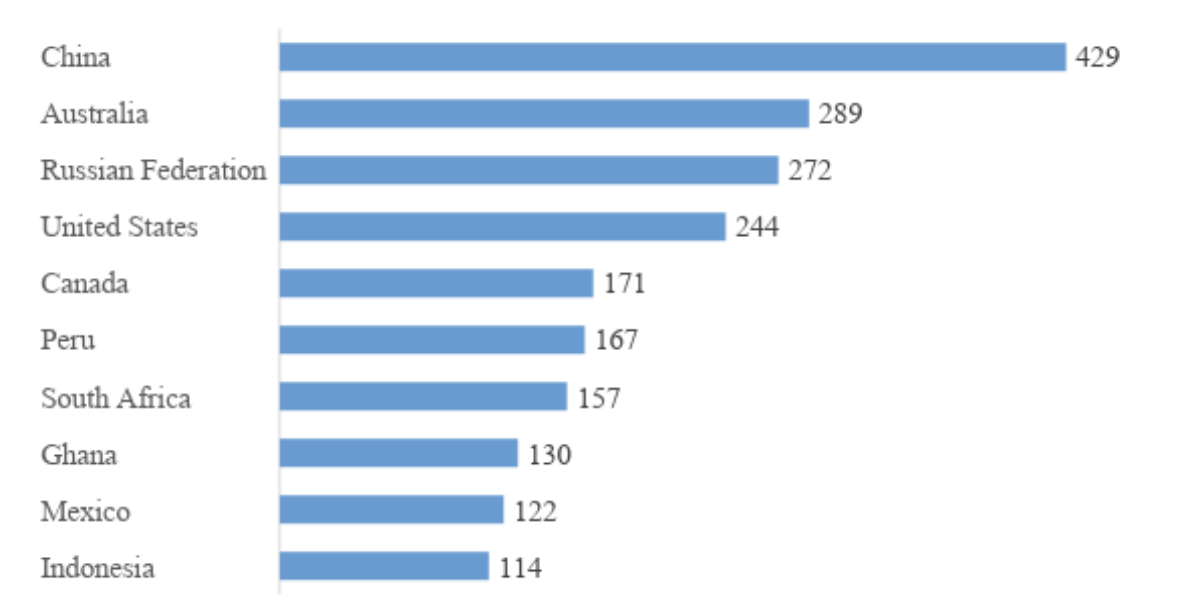 China is the leading gold producing country.  However, a production growth pattern changed to decline in 2017-2018, and is likely to continue, due to stricter environmental regulations. These regulations – particularly related to cyanide in tailings – have had a dramatic impact on national gold production6.  (However, gold supply could increase from Russia, given a large number of new projects under development7). In short, it seems the stock of gold is finite and only limited supply is being added annually to the stock. (b) Demand Demand for gold, at a very macro level, is best summed up by the following two charts: Exhibit 3: Gold demand in 2010-2018, tones8 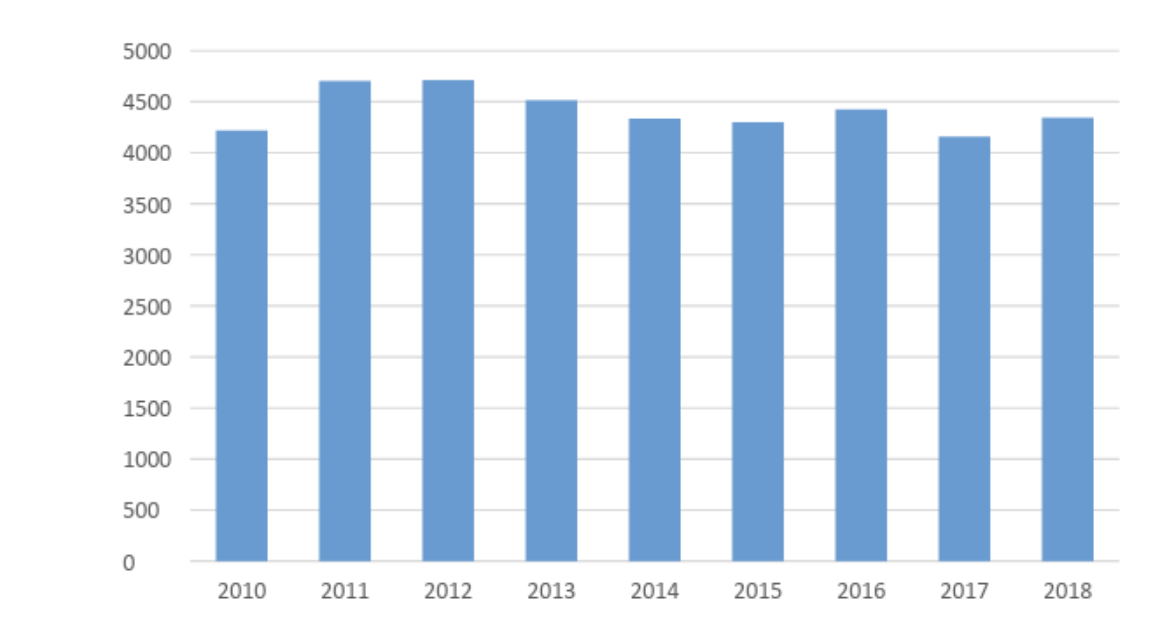 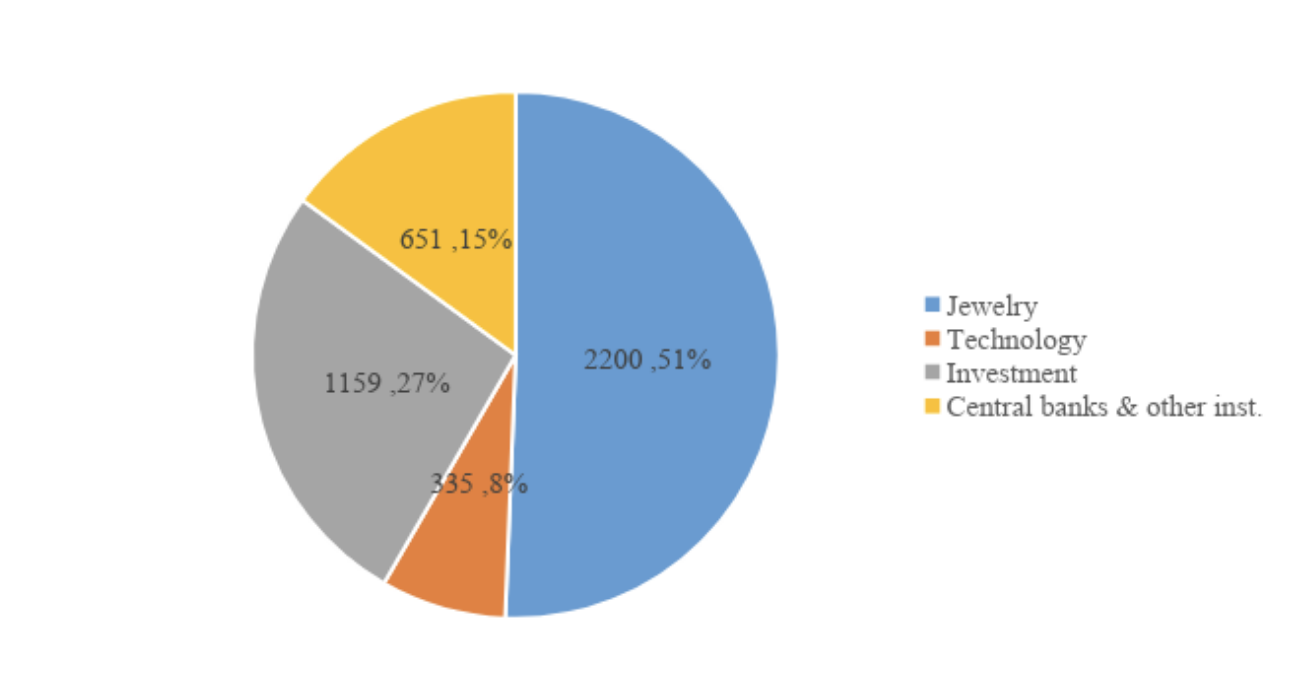 A few words about each of the four major areas of demand for gold.  In 2018, jewelry was by far the largest source of demand, particularly in Asia (India and China). Exhibit 5: Jewelry demand in selected countries, tones10 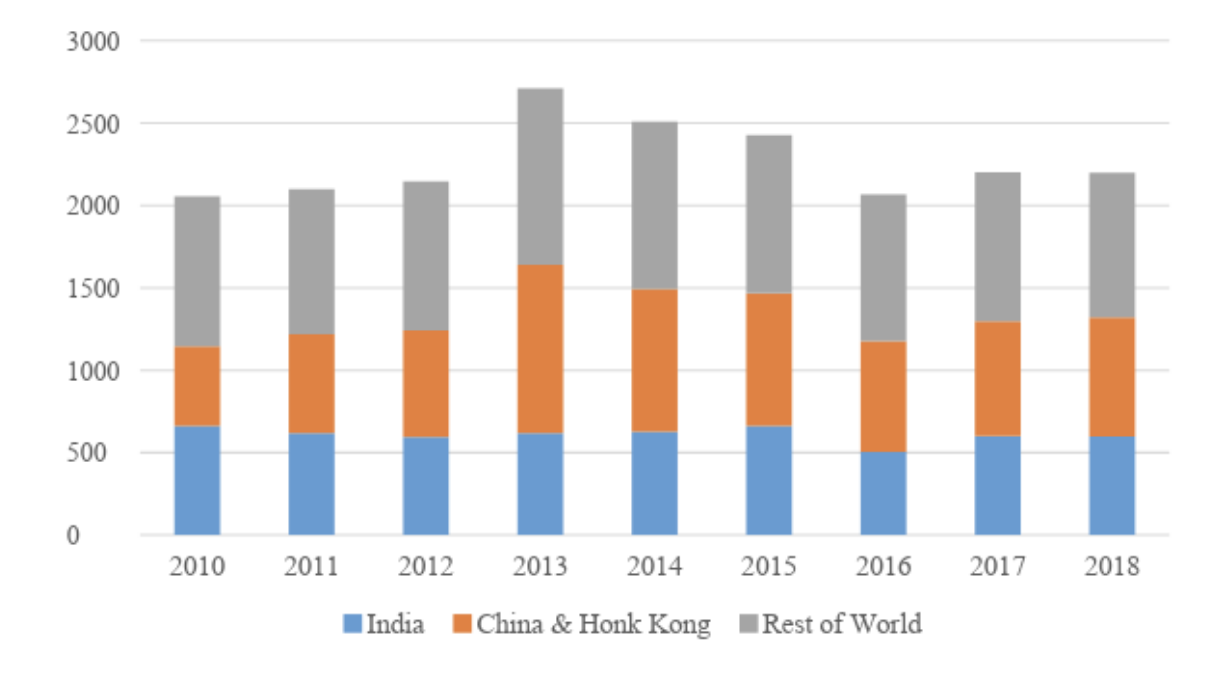 Gold demand in China tripled between 2004 and 201311. There is potential for further increase in gold demand in China and India, due to the fact that reverence for gold seems culturally ingrained, and rising affluence and growing middle classes in both countries.  Gold demand has also been growing in other Asian countries like Indonesia and Vietnam. Another source of demand – and recently a growing one – has been Central Banks. According to the IMF, official world gold holdings are almost 33.9 thousand tons as of February 2019. US and Germany have the highest official holding, as gold exceeds 70% of their reserves. Exhibit 6: Top 15 countries/financial institutions based on gold holdings as of February 201912 Demand from Central Banks has recently been increasing significantly, from 9% of total gold demand in 2017 to 15% in 201813.  Some past and future potential sources for Central Bank demand: According to John Reade, chief market strategist at the World Gold Council: “reserve asset managers at central banks recognize that they have a very high proportion of their foreign reserves is held in U.S. dollars. If you are looking for an alternative to the U.S. dollar then I think gold looks more attractive than it did 10 or 15 years ago. If you look at alternative reserve currencies, there are issues with all of them.”17 The technology sector and especially electronics is a third source of gold demand because of its physical properties: pliability, corrosion and tarnish resistance. It is ideal for coatings, for connectors and contacts, and gold bonding wire within semiconductor packages. Due to cheaper alternatives, gold’s share of the wire bonding market significantly dropped since 2010. However, in 2017, gold use in technology rose by 3%, the first year-on-year increase since 2010. In 2018, this rose by another percentage point, reaching 334.6 tones. The strong demand for consumer electronics and ongoing electrification in the automotive sector drove this annual growth18. Exhibit 7: Technology demand, tones19 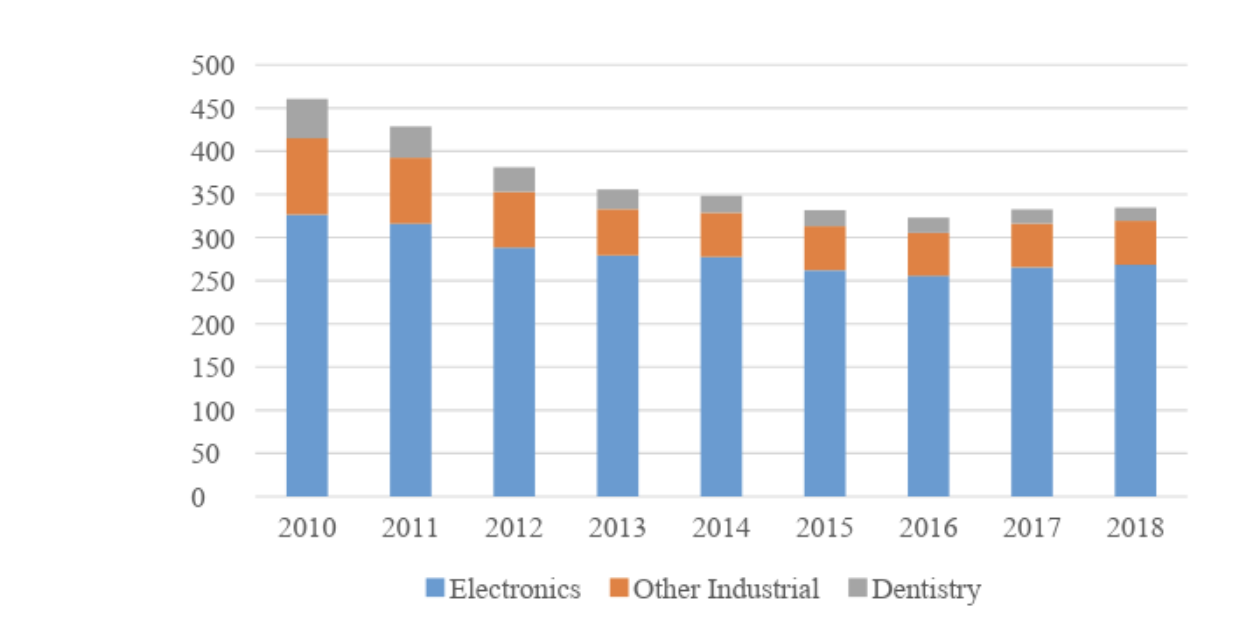 There are also many new uses that may drive demand for gold in the automotive, electronics, industrial, healthcare (particularly related to gold in nanoparticulate form), and telecommunications (e.g. 5G) sectors. Investment demand for gold has been the most volatile area of demand for gold. This includes gold bar and coin, gold-backed ETF’s.  Demand goes up when investors require a safe haven. As the world economy has done well, perception of risk has been low, gold price have performed poorly: Exhibit 8: Investment demand, tones and gold price, US$/oz.20 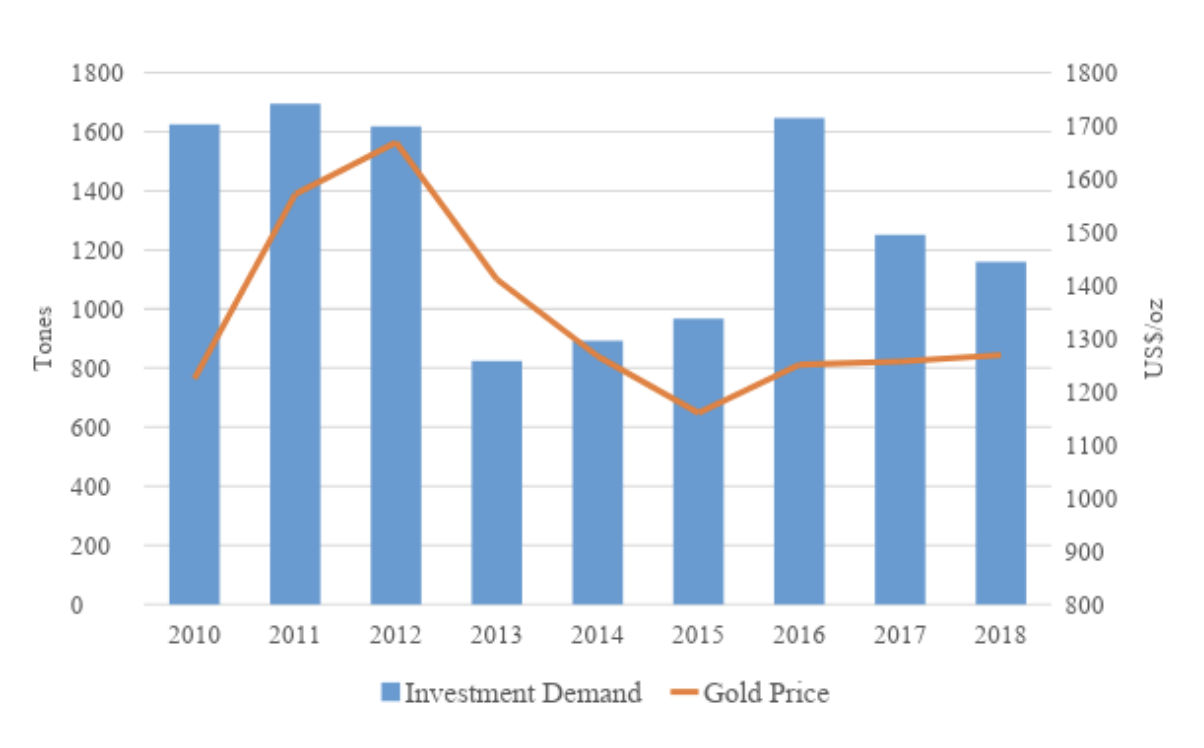