The US Repo Market—A Harbinger of Recession? by Les Nemethy and Sergey Glekov

Recent irregularities in the US repo market may be early indicators of an upcoming recession, as was the case in 2008-2009 and before the dotcom crash of 2001. The repo market is crucial for the health of the financial system, as it used by banks to obtain short-term liquidity and the size of the repo market is substantial: according to data of Securities Industry and Financial Markets Association the US average daily repo and reverse repo outstanding was $3.9 trillion in 20181.  Hence the recent turbulence in repo markets should be of interest not just to bankers, but to any astute observer of the financial system, who wishes to have a deeper understanding of the direction in which markets are headed.

In an overnight repo transaction, holders of U.S. Treasuries and other bonds sell their securities to other institutions with allowance made to repurchase those securities the next day at a set price. The difference between the sale price and the repurchase price is the effective borrowing interest rate, or the Effective Federal Funds Rate (EFFR). EFFR is calculated as a volume-weighted median of overnight federal funds transactions.

Repos are sometimes known as “sale-and-repurchase agreements” or “repurchase agreements”. In a repo transaction, one party sells an asset (usually fixed-income securities) to another party at one price and commits to repurchase the same asset from the second party at a different price at a future date. If the seller defaults, the buyer takes title to the asset and may sell the asset to a third party to offset his loss. The asset therefore acts as collateral and mitigates the credit risk that the buyer has on the seller3. Repos may be overnight (e.g. duration of one day) or term (duration up to one year, but typically up to three months).

Ideally, collateral should be free of credit and liquidity risk, therefore government bonds are most commonly used collateral in the repo market. In the US, Treasury securities account for about two-thirds of the US repo market4.

Because the EFFR is calculated based on median daily statistics, short-duration gyrations will not be reflected. The exhibit below illustrates the rather nasty gyration that occurred in mid-September, 2019 as it shows the intraday US repo rate. The spike signifies that liquidity in the system was freezing up. Exhibit 2: Spike in the US overnight repo rate in September of 20196 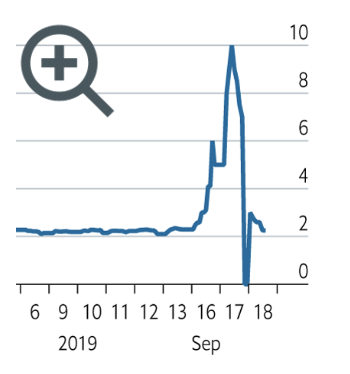 To restore liquidity and counteract the spike, between September 17-24, 2019 the New York Fed injected a whopping $270 billion into the banking system and committed to continuing daily repo operations through October 10, 2019. The Economist magazine called this event “an alarming echo of the financial crisis”.

At the beginning of October, the New York Fed announced a further extension of daily repo operations to November 4, 2019. Those efforts have succeeded in calming markets for now. The EFFR decreased significantly over last month. However, experts money market stress is expected to rise again towards the end of the year, when banks concerned about liquidity requirements may be less willing to lend their reserves7.