The good news is that there is a light at the end of the tunnel:  whether through herd immunity, containment, or invention of a vaccine, this, too, shall pass.  China has shown how to contain the virus with authoritarian methods, total lockdown. South Korea, Singapore and Hong Kong have also experienced success, with somewhat less authoritarian approaches.  The United States and major European countries are finally getting serious about dealing with the virus. Let’s hope that we learn from our mistakes and best practices emerge, which help us get the virus under control.

The bad news is that things will likely get much worse before they get better:  the number of cases and deaths will likely skyrocket before we reach the end of the tunnel. “We ain’t seen nothin’ yet!”  Significant parts of the US and Europe are likely to experience Wuhan or Italian style spike in cases, with medical facilities overwhelmed, creating enormous humanitarian suffering.  The potential number of cases and deaths which might ensue when poorer countries are hit (that have less developed medical infrastructure) simply boggles the mind. This is a global problem and global leadership and coordination seem to be sorely lacking.

What happens to the economy and financial markets is predicated on the course of the disease.  The following analysis is based on the above view as the course of the disease. In other words, the economy and financial markets are also likely to get worse before they get better.   The fed recently unleashed a massive stimulus package, reducing interest rates and injecting massive liquidity into the system, and other countries have followed, yet markets continued to hemorrhage. A virus cannot be fought with financial means.  The effects of the economic and financial fallout might be somewhat alleviated, but so long as the virus continues to augment geometrically in large parts of the world, uncertainty will prevail, consumption and investment decisions will be postponed, and the economy and financial markets will continue to trend downwards.  There is fear that the Federal Reserve is in the process of firing all its bullets, and there may not be much left soon. Perhaps we will see money being dropped from helicopters, to use the phrase coined by Ben Bernanke.

We can look to China as the major economy of the world that has passed through the coronavirus storm and is beginning to emerge.  According to the latest data of the National Bureau of Statistics of China, industrial output plunged at the sharpest pace (-13.8%) in 30 years in the first two months of the year2.   Car sales in China collapsed 79% compared to a year ago, according to data released by the China Association of Automobile Manufacturers. Passenger air traffic plummeted 85% from a year earlier, according to the Civil Aviation Administration of China (CAAC). Cargo traffic decreased 21%3.   Large numbers of businesses are bankrupt or are about to go bankrupt.  Businesses that have been shuttered for months have consumed cash and are starved for liquidity.  And this is the optimistic scenario as to what happens when the virus has largely been contained after just a few months!

In looking at the Exhibit below, one should bear in mind that at the beginning of the year markets were so frothy, they were almost looking for an excuse for an adjustment.

The fact that the world is so highly leveraged does not bode well (see our earlier article)5.  All types of securities, including safe haven assets such as gold are being liquidated because of the need to satisfy margin calls, driving markets in a negative spiral.  Corporate debt levels, including record levels of junk bonds worldwide, make the world more vulnerable to shocks. Bankruptcies will proliferate. Certain countries, such as Italy, have extremely high debt levels. Economic contraction could even drive sovereign debt into default.

The unprecedented volatility is the most probable outcome for the next weeks. The Volatility Index VIX, the single best measure of perceived risk in the global financial system, has already reached its maximum since 2008. 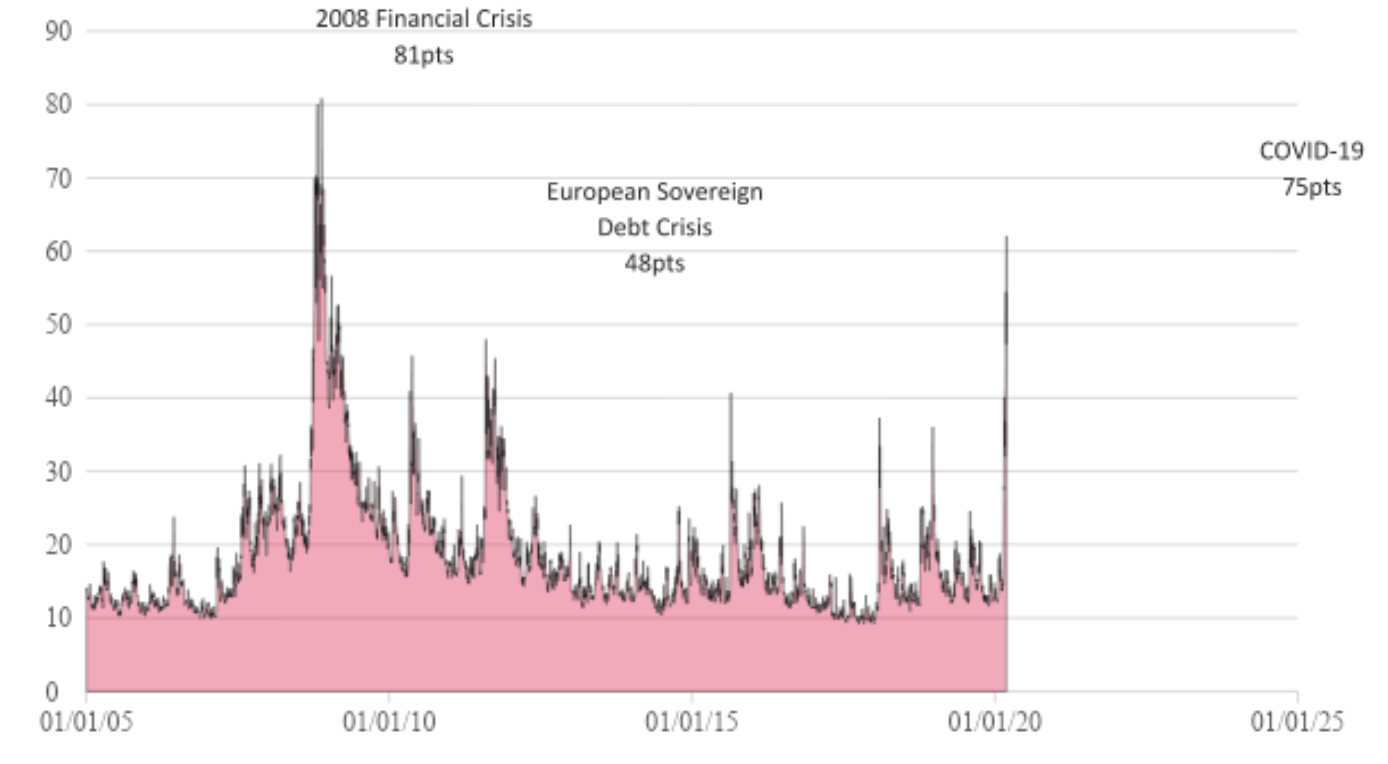 So where do we go from here?  As already mentioned, this will depend on the course of the virus.  Assuming that things will get worse—possibly much worse– before they get better in the majority of the world, economic output and financial markets will continue to trend downwards or even collapse.  Governments will be trying hard to contain the disease and doing their best to keep economies alive by applying fiscal and monetary defibrillation to keep economies alive. Rest assured, this too will pass.  But at what cost?
1Johns Hopkins University as of March 16, 2020
2China’s economy skids as virus paralyses factories, https://www.reuters.com/article/us-china-economy-activity/chinas-economy-skids-as-virus-paralyses-factories-households-idUSKBN21307F
3China boasts massive car and aviation markets. Both collapsed in February, https://edition.cnn.com/2020/03/12/business/coronavirus-china-auto-aviation-losses/index.html
4Data Yahoo Finance
5https://europhoenix.com/blog/debt-levels-have-we-learned-the-lessons-of-2008/
6Data Yahoo Finance

Psychologists say that the human brain suffers from dozens of different biases, perhaps one of the most important of these being “recency bias”. We tend to project the past into the future.

While there are short-term fluctuations in interest rates caused by economic circumstances and central bank policies, there are also long-term structural trends affecting interest rates. This article will look in greater detail and one of the most important of these, namely demographics.